Tito Ortiz admits his third fight with Chuck Liddell is something of a gamble, but says he’s a gambling man. Given his footwear at Tuesday’s press conference, we believe him.

We’re just a few days out from what Tito Oritz says is his retirement fight. Disregarding the fact that he’s retired a couple of times before, his fight against Chuck Liddell, the third in their career series, does feel like a book end. Coming under the Golden Boy MMA banner, with a paycheck riding on how well the PPV show does, it’s something of a gamble. But, Ortiz told Cageside Press on Tuesday, he’s a gambling man. Looking down, well, he’d have to be. Even his shoes were something of a gamble (just check out the video above).

Speaking about the end of his career, Ortiz said that when he looks behind him, “there’s not one rock unturned. I’ve really worked hard to be where I am today, I’m very thankful to be where I am today.” Now, he can look forward to one last walk. One last fight. “Four more days, and it’s time to go to war. I can’t wait.”

In advance of the fight, he decked himself out for a funeral, presumably Liddell’s, or at least any notion of ‘The Ice Man’ making a comeback. An then there’s those shoes. Gold and black, gold spikes, as Ortiz pointed out. Combined with his gold and black watch and black suit, it was “like I’m going to a funeral,” he explained, “because there is going to be a burial Saturday night.”

At Tuesday’s press conference for the event, Golden Boy’s first foray into mixed martial arts, Ortiz claimed to have some inside knowledge of Liddell’s training. Some of that centered on Antonio McKee, who heads Team Bodyshop, where Liddell has held his current fight camp. However, Ortiz walked some of that talk back later on.

“Antonio never told me nothing. It wasn’t nothing towards Antonio,” Ortiz admitted. “I do know things though. You live in Huntington Beach, you’re not going to be able to get by things without me knowing.”

Ortiz pointed out that Liddell “says he trains as much as he takes time off. Okay. He says he lets his body recover. Well, at that age you’ve got to let your body recover a little bit, I understand that.” However, while Ortiz lets his body recover as well, “I’m in the gym six hours a day,” he said. “For him to only be in the gym two hours a day, five days a week — I don’t know. I hope he’s in as good as shape as he says he’s in. I’m in great shape.”

Ortiz was clear, however, that McKee hadn’t leaked him any inside scoops. “I’ll take it back, what I said about Antonio. Antonio never said anything to me at all. Antonio’s a good dude, I’ve known him for a long time,” Ortiz reiterated. “But I know all the other training partners he’s with too.”

As far as the payday waiting at the end of all this, Ortiz admitted that it’s a gamble. Howver, “I’m a gambling man. I’ve always been a gambling man,” he said. “And I’m willing to put my gamble out there knowing that I have some really really great fans. I know Chuck Liddell has some really really great fans. They’ve always wanted to see this number three fight happen.”

We’ll know soon enough if those fans tune in for the trilogy fight between Tito Ortiz and Chuck Liddell. 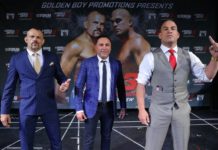 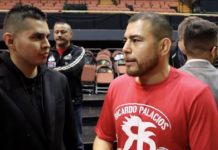