Neil Magny has been trying to break into the next title picture for several years, but he has the surging Santiago Ponzinibbio in his path at UFC Argentina.

While the top five of the welterweight division has been the subject of much conversation, several contenders have spent the better part of 2018 improving their standing in the rankings.  Neil Magny is looking to finally make the jump from perennial contender to serious title challenger.  However, the surging Santiago Ponzinibbio will be looking to turn him away when the two meet at UFC Argentina.

Neil Magny has been in the UFC since 2013 where he has put together an exemplary record of 14-5.  His list of victories contains notable names such as current middleweight title challenger Kelvin Gastelum and former interim champion Carlos Condit.  A tall fighter with a diverse skill-set, Magny has been difficult challenge for even some of the best fighters in the welterweight division to overcome.

While he has had several years of improvement and reinvention, 2018 appears to be the turning point for his UFC run.  In his favor, he is coming off back-to-back victories in upsetting the highly touted Condit in December and following it up with a dominant win over Craig White in May.  But as the division is set to welcome Ben Askren into the fold and fighters like Colby Covington and Kamaru Usman are already in title contention, the opportunities for Magny to make a title run while in the prime of his career are slowly diminishing.

On Saturday he will have a stern test as he faces Santiago Ponzinibbio in his home country of Argentina.  The 32 year old Ponzinibbio has had a similar path in the UFC to Magny, even entering the the company the same way through The Ultimate Fighter and by far being the best fighter from his respective season despite also not winning the show.  A veteran of the sport since 2008, Ponzinibbio began his career by dominating the circuit in Asia and Brazil before making his official UFC debut in 2013.  He has since put together an impressive 8-2 record in the Octagon including his current six fight win-streak that propelled him into the top ten.

Last December, Ponzinibbio recorded the biggest win of his career in overcoming welterweight stand-out Mike Perry.  The victory had set up the biggest fight of his career, a match-up with Kamaru Usman in May that would have put him on par with Darren Till and Colby Covington for title contention had he won.  An injury forced him out of the bout, and the fight with Magny will be his first in nearly a year.  With Till moving up to 185 and Covington likely to receive his title shot early in 2019, a victory for Ponzinibbio could likely set him up for a title eliminator in his next outing.

What Neil Magny lacks in firepower, he makes up for with technical proficiency.  Magny effectively utilizes his 6’3 frame and 80 inch reach to keep opponents at long range where he can pick them apart with an array of punches and kicks.  He should look to maintain the distance with Ponzinibbio and attack with high volume to keep the Argentinian from settling into a rhythm.  Magny also has an impressive ground-game and could look to tie-up Ponzinibbio and get him to the ground where his formidable power becomes a non-issue.

Ponzinibbio by comparison is an explosive striker who does his best work when he is able to throw his powerful shots at short range.  Against Magny, the biggest key is to get inside where the American’s height and reach are neutralized.  He should look to spend as much time in the pocket as possible as a brawl looks to favor him in nearly every scenario.

Both men are aware that an impressive enough performance here could propel them close to the championship opportunity they covet.  All signs are pointing toward champion Tyron Woodley and Colby Covington colliding next year, with the winner of Kamaru Usman and Rafael dos Anjos later this month setting themselves up for a title shot afterward.  Barring injuries in the title picture, it stands to reason that the winner of Magny and Ponzinibbio will have to face at least one more opponent before fighting for the belt. 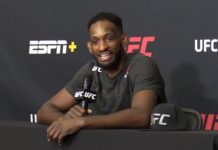 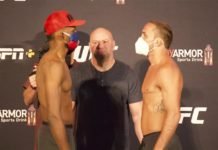