Kicking off the main card at Bellator 209 in Tel Aviv, Israel, heavyweight action started the show with a bang as Adam Keresh made short work of ‘Baby Fedor.’

Bellator 209 went down Thursday night in Tel Aviv, and thanks to the magic of tape delay, we can now bring you how the first fight of the main card went down. Opening the action, we saw Adam Keresh as he returned to cage after defeating Roman Kushnir in Keresh’s back at Bellator 188. He was set to greet the newly signed “Baby Fedor” Kirill Sidelnikov in his own Bellator debut. Sidelnikov entered the night with a 11-5 record outside of the organization as well as multiple medals and championships in Combat Sambo.

Keresh threw the first punch, but Sidelnikov was quick to press the action, landing his shots. He took Keresh down with a body lock. They worked back to their feet where Keresh landed a heavy kick that landed on the chin of Sidelnikov and dropped him. Keresh pounced and caught Sidelnikov with a flurry of blows as he tried to get back to his feet; that once again dropped ‘Baby Fedor’ to the mat as the ref jumped in to bring a stop to the action. 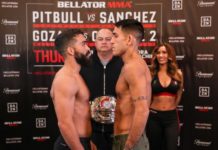 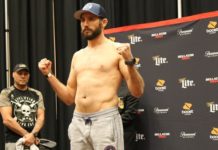