Bellator 209 went down Thursday in Israel (airing Friday via tape delay), where Phil Davis made the long walk once again to the cage to face opponent Vadim Nemkov in a scheduled three round Light Heavyweight contest. Davis, since losing his title to Ryan Bayder at Bellator 180 has been quick to get back on track with two wins leading up to his meeting with Nemkov. Vadim Nemkov also entered the night riding a two fight win streak since entering Bellator, with his most recent win coming over former Light Heavyweight Champion Liam McGeary by TKO at Bellator 194.

To start things off, Nemkov took the middle of the cage and threw a leg kick followed by a head kick that missed the mark. Davis fired back with a body kick followed by a hard overhand right the pushed Nemkov back. Nemkov was quick to return fire, and the two men continued to exchange. Nemkov then caught a kick by Davis and took him to the ground, looking for a choke that Davis was able to defend. The pair then got back to the feet. Nemkov continued to utilize his kicks as he mixed in leg and body kicks. Nemkov shot the take down that Davis easily stuffed; he considered going for a choke of his own as the round came to an end.

.@PhilMrWonderful Davis & @VadimNemkov in a very close fight after one round at #Bellator209, how did you score round one? pic.twitter.com/mvy6RjsiWI

In the second, Nemkov was quick to control center again and opened quickly with kicks and combos; Davis fired back but Nemkov continued to press. Davis looked to land that hard overhand right that just missed the mark. Nemkov answered back with more body kicks on Davis. Davis again just missed with overhand right and Nemkov fired back a hard right of his own. Davis initiated the clinch and looked to land the knees, but Nemkov spun to his back and lifted Davis into the air, slamming him to the mat. David popped back to his feet but Nemkov stayed on him and once again threw him to the mat as the round closed.

Davis opened the third round working his jab and Nemkov answered back. David landed a hard right hand again that Nemkov shrugged off. Davis looked to press the action this round. Nemkov used his moment to slide in and out of range of a lot of Davis’s shots, until Davis got a hold of him and secured the take down. Davis worked for the Kimura from top but Nemkov slid out and got back to his feet. Davis was right back on Nemkov and again took him down and looked for the Kimura submission as Nemkov looked to survive until the bell sounded. When it did, on the scorecards, he’d pulled off the split decision for the biggest win of his career. 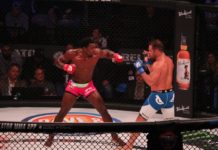