No UFC card would be complete without some sort of controversy involving the officials. At UFC Denver, that came in the form of an apparently quick stoppage in Bobby Moffett vs. Chas Skelly.

Denver, CO — On a night where the judges were their usual questionable selves, UFC Denver’s most controversial result was a finish. The featherweight contest between Bobby Moffett and Chas Skelly ended it what appeared to be a quick stoppage by the ref, who felt that Skelly had gone out to a D’arce choke. Skelly immediately popped up and protested the call, and told reporters post-fight that he’s planning to appeal.

From his perspective, on the controversial finish, Moffett said that “I was just trying to advance the choke. I had him, I was choking him, and I was like ‘you know what, if he’s not going to tap to this right now, I’ve gotta hook once of his legs and extend my back and put real pressure into it.'” That’s when the referee intervened. “When I was going for hooking his leg, the referee pulled me off.”

To Moffett, it’s simple: the ref made the call, he let go of the choke. “I’m just doing my job. I’m here to choke people, like I said. I’ll squeeze him til his head pop’s off. If that’s what the fans want me to do, that’s what I’ll do. That’s why I’m here, to entertain people.” Point taken, though we’re not sure how entertaining that would actually be.

Moffett admittedly was concerned about the fight being called a No Contest. Especially while footage was being reviewed. “I didn’t want all that effort that I put into this camp, and the submission to be taken away from me,” he said. “Because I had it. And he wasn’t going to get out. And even if he did get out, I was going to fight him harder than he was going to fight me. I could feel that he was getting weaker, and I felt good about it.”

On the suggestion that the fight be run back, Bobby Moffett seemed indifferent. “I’m here to fight anybody in the featherweight division,” he stated. “Whether they want me to fight him again or not, it doesn’t really matter to me. I’ll beat the next person in front of me. I don’t care how many controversial finishes they give me, I’m going to keep finishing people.”

Skelly told reporters including Cageside Press that he felt Moffett tiring during the submission attempt. Moffett, however, dismissed that notion. “I’ve put in a lot of work in the gym, wrestling and striking. Back-to-back, we were mixing the rounds and everything,” he explained. “I felt like my arms and my cardio were just at a whole other level. It didn’t matter what the elevation was, I could fight 25 minutes right now.”

“I came into this fight like there was no tomorrow. There was no way I was getting tired,” he added. 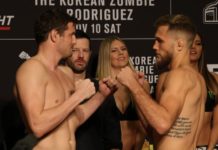 Over 18 Months Later, Chas Skelly Has Moffett Result Overturned to No Contest 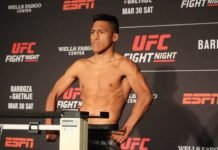 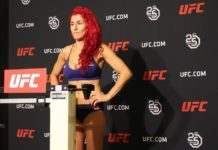