Enrique Barzola came into UFC Uruguay looking to get back on track. In his most recent bout, Barzola’s four-fight winning streak was snapped in a unanimous decision loss to Kevin Aguilar at UFC Philadelphia in March. Since becoming the The Ultimate Fighter: Latin America 2 lightweight tournament winner in November of 2015, the 30-year-old Peruvian had gone 5-2 in the promotion. Each of his seven career UFC bouts had gone to a decision.

Bobby Moffett was looking to return to his winning ways as well. Moffett lost his most recent bout, against Bryce Mitchell, taking a unanimous decision loss while earning the Fight of the Night bonus at UFC Nashville. The LFA veteran joined the promotion in November of last year, following a victorious appearance on the Dana White Contender Series last summer. He was 1-1 in the promotion ahead of his trip to Montevideo, after he defeated Chas Skelly via D’Arce choke submission in his UFC debut.

Moffett came out the slightly more aggressive fighter, taking the center of the Octagon and firing a few kicks early-on in round one. Barzola was patient, and eventually landed a quick flurry of his own and began to throw more consistently as the round went on. Both fighters landed throughout the round, but were unable to do any major damage as the fight stayed on the feet for almost the entirety of the first five minutes.

Barzola pressured Moffett early in round two, landing a combination before forcing Moffett against the cage in a takedown attempt. Moffett was able to stay off of the ground, getting the fight back to the center of the Octagon. Then it was Moffett’s turn to clinch, pushing Barzola against the cage and failing on a takedown attempt of his own. Both fighters continued their high pace, high volume striking attack from round one throughout round two.

Barzola’s punches looked to be landing more in round two, as he gained comfort in range and threw his hands more regularly. Between flurries, Barzola was forced to stuff another takedown from Moffett, as Moffett’s faced began to show more damage. A low-kick from Moffett then momentarily paused the fight with 90-seconds left in the round. Barzola landed a nice left hook after the pause in action, before eating a right hand from Moffett after a missed spinning head-kick from Barzola. Moffett ended the round well as the crowd roared, landing several hard shots. Then, Barzola landed a takedown while the final seconds ticked away and the horn sounded.

Barzola landed the first shots of note in round three, using the strikes to shoot for a takedown against the cage. Moffett defended well, as both fighters continued their impressive striking volume and pace from the first two rounds. A small cut opened underneath the right eye of Barzola, but that didn’t stop the Peruvian from pressing forward and controlling the center of the Octagon. Moffett slowed the aggression from Barzola with a strong combination, with less than two minutes remaining in the fight.

In a very competitive fight, neither fighter pushed for the finish in the final minutes. The pace finally slowed a bit, as each fighter was slightly more selective with their strikes. In the final 30-seconds, Barzola unleashed a flurry and scored a takedown. Moffett was able to get to his feet before the horn sounded, and the close fight went to the judges. 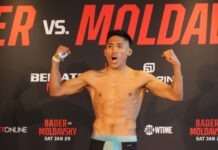 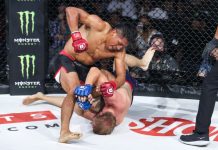 Bellator 278: Enrique Barzola Has A Message for Magomed Magomedov