Having claimed another questionable record in the UFC, Gian Villante is hoping to be booked into more slugfests, and won’t rule out a run at heavyweight following his win at UFC Moncton.

Moncton, NB — Gian Villante claimed a UFC record on Saturday night at UFC Moncton, becoming the first fighter in the promotion to go to four consecutive split decisions. It’s not a record he necessarily wants. “Gross,” he said of the distinction. He can add it to the collection, as the first fighter to have three consecutive fights absorbing more then one hundred strikes.

At least on this occasion, he got the win. “I thought I hurt him, almost had him in the first,” he recapped backstage with reporters after the bout. “Then he, I wouldn’t say he hurt me, but from the outside, it looked like I got hurt in the second, lost the second. Third round, I kind of got like a burst of energy, I was just trying to go forward, and finish him a couple of times, really looking for a finish in the third.”

“Got a little bit tired after that takedown attempt, which was a horrible attempt,” Villante continued. “Then I stopped his. Then kind of stood in front of each other for the last ten seconds. I guess maybe that burst in the beginning, or the middle of the round, maybe that’s what got me the victory. I was going forward the whole time in that round, maybe that’s what gave me the win, if I had to pick it apart.”

Coming into the fight, Villante had been asking for someone who would bring the action. Asked he if felt he got that, he answered “Yeah. Especially after I hurt him in the first, I thought he’d be a little more hesitant to sit in there and trade with me. But he wasn’t. He was ready to trade the whole time.”

“Some good powerful shots,” he added. “I saw his stuff coming and stuff, probably should get out of the way but I just kind of like eat it so I can land one myself. Not always the smartest thing. It was a fun fight, I give him a lot of credit, I’m just happy to walk away with the win.”

Herman and Villante were respectful in the cage after, though ‘Short Fuse’ was a bit fired up about losing, questioning the result. Asked about what the pair said heading out of the octagon, Villante explained that “I didn’t take any disrespect by what he said, I understand. I know the feeling, being in those decisions and being on the other end of them, and losing them.”

“I understand the frustration. A lot of hard work goes into this stuff. He’s been in the sport a long time,” Villante pointed out. “Especially being hung up on an injury a little bit, get in there and get a close fight like that and lose a split decision, that’s tough man. But I put the same hard work in if not more.”

“Lot of respect to the guy. Happy to get the win tonight. He’s a tough dude, man. After I hit him with some good shots in there, landed some hard ones on him, I just didn’t think he’d want to trade anymore.” Herman, however, surprised Villante. “But he still did. I felt we put on a decent show.”

As for what comes next, “another fun fight” is Villante’s preference. “Making it tough on these matchmakers, not getting these finishes that I should get.” He’d like another opponent willing to stand and trade. “I’m just hoping they put me in with guys that want to put on some slugfests. Because I know no matter what I get hit with, I’m willing to throw down with anyone.”

While Villante was non-committal when Nikita Krylov was suggested as an opponent, he perked up when informed that ‘The Miner’ had never gone to decision. And he would not rule out a run at heavyweight.

“Why not? I do like slugging, man, and up there, why not? I’d do it up there with them big dudes. I think it’d be fun,” Villante said of the possibility. “I’ve been hit by some of the hardest hitters at heavyweight in both boxing and MMA. Stipe Miocic, and my buddy Adam Kownacki, number four in the world at heavyweight.” 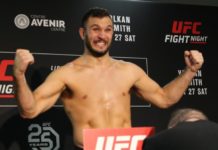 Fili vs. Moraes, Villante vs. Rodriguez The Latest Additions to UFC Sacramento 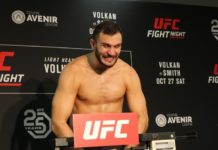