Following a TKO finish of Nordine Taleb at UFC Moncton, Sean Strickland explained that his only vice is training. And yes, he’d choose it over sex.

Moncton, NB — Sean Strickland had a tough assignment at UFC Moncton on Saturday night: March into the Avenir Centre in Moncton, New Brunswick, and go up against a Canadian with plenty of experience under his belt in Nordine Taleb. Enemy territory, with more attention drawn to Strickland’s outsider status given that he walked out to the Star Spangled Banner on electric guitar.

Ultimately, it was a successful night for Strickland, and all in good fun, as he let it be known he really enjoys Canada, minus the harsh gun laws, given he’s a country boy. The North Carolina native improved to 20-3 on the night with a second round TKO of Taleb — a great performance from a guy who admits fear was holding him back.

“I’m one of the hardest training guys in the UFC, and I’ve been to all the best camps. I’ll tell you that from experience,” Strickland told reporters including Cageside Press following the bout. “In the gym, I’m phenomenal, there’s not one guy that can beat me, every gym I go to. But when I fight, I’m so afraid of failure, it’s a ceiling I put up over myself.”

Expanding on that subject, Strickland explained that “after my last fight, getting clipped like that, knowing I got clipped because I was so afraid to fight… because that’s all it was, he clipped me because I was afraid to fight. Going into this fight, I just said ‘I don’t even care if I get knocked out, I’m coming here to fight, and prove how good I am.'”

“If it was an early stoppage, it would have been stopped just a few seconds later.”

The bout marked the final fight on Strickland’s UFC contract. “I love being a UFC fighter. I will fight somebody who’s ranked, I will fight somebody’s who not ranked, a newcomer, I don’t care,” he said of his status. “As long as I get to keep doing what I’m doing, I’ll fight anybody. I just love fighting.”

In regards to other offers, “other organizations pay well too, but for me, my dream growing up was to be a UFC fighter. So for me, I’m living my dream in the UFC.”

He did take the opportunity at UFC Moncton to send a message. “Mostly a statement. Mostly it’s like, when you get that last fight, you have to do something. Because if not, there’s so many guys that want to be UFC fighters, that you have to earn your keep in this sport,” Strickland explained. “And that’s all I was trying to do, earn my keep.”

As for any vices or celebration? Not so much. “I’ll eat bad, but my addiction’s training. I love it. Literally the only thing on this planet I love to do, girls, sex, whatever, I will pick training any day over any other thing on this planet,” Strickland claimed. “I would train right now, if somebody at a gym offered me to go spar a few rounds, I would test my knee out, be like ‘alright I’ll be over in a second.’ I love it.”

Which is why he’s fighting, and we’re reporting. “It keeps the demons at bay,” he later added. 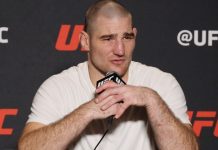 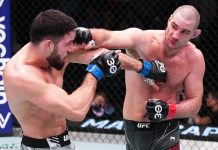