Don Madge and Anthony Smith were among the bonus winners at UFC Moncton on Saturday night in New Brunswick.

Moncton, NB — With a number of big finishes on the UFC Moncton card (we see you, Calvin Kattar), the bonuses Saturday night were going to leave at least a few fighters out in the cold. Not to mention a couple of candidates for Fight of the Night, including the slugfest between Ed Herman and Gian Villante. When UFC VP of International and Content Dave Shaw announced the bonuses backstage at the Avenir Centre, however, none of the above were in the mix.

Who was? Anthony Smith, for starters. His impressive (and potentially title-shot earning) submission finish of Volkan Oezdemir earned him one of the two Performance of the Night awards at the event. It put an exclamation point on his now three-fight win streak in the light heavyweight division, and while he’ll now take some time off, he’ll have a little fun money to spend with his family.

Don Madge also had family in mind when it comes to bonus money. Madge, who knocked out Te Edwards, setting up the finish with a head kick, earned the other Performance of the Night award. It was the South African’s UFC debut, and he made it in style.

Fight of the Night went to Nasrat Haqparast and Thibault Gouti. The pair battled it out for three rounds, with Haqparast nearly finishing a couple of times. He took home the unanimous decision win, potentially breaking his thumb in the process. 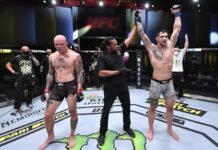 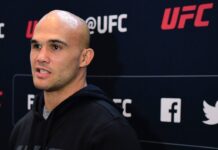