With UFC Moncton going down tomorrow night at the Avnir Centre in Moncton, New Brunswick, here’s one last look at the full card facing off!

Moncton, NB — All thirteen fights at UFC Moncton (UFC Fight Night 138) are a go, and Friday morning, the UFC hosted a brief face-off featuring all fighters on the card. With no official weigh-in ceremony, it was the last chance to get a glimpse of the athletes before Saturday night’s main event.

While Michael Johnson missed the mark on the scales by a pound, his fight against Artem Lobov was still on. Serving as the evening’s co-main event, the other half of the scrap, Lobov, had told reporters a day earlier that he’d take the fight regardless of whether Johnson hit the mark. On top of that, feeling generous as Johnson took the fight on two week’s notice, Lobov also said he’d return any fine money to ‘The Menace.’

All other fighters on the card made weight, including the main event pairing of Volkan Oezdemir vs. Anthony Smith. While not officially a title eliminator, it seems nearly unthinkable that one of the pair won’t challenge for the light heavyweight title at some point in 2019.

For a glimpse of all of Friday’s face-offs, check out the gallery below. You can also hit up our weigh-in gallery, and official weigh-in results! 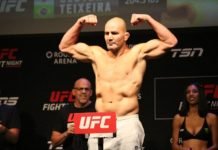 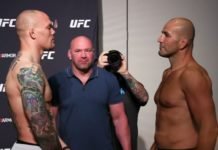