Darren Stewart was pretty thoroughly dominated in the first round of his UFC 228 scrap against Charles Byrd — but that didn’t stop him from ending Byrd’s night in the second.

UFC 228’s televised preliminary card was kicked off on Saturday by middleweight action between Charles Byrd and Darren Stewart. It was a bout featuring fighters on very different trajectories of late. Byrd was the winner of four straight, including two appearances on Dana White’s Tuesday Night Contender Series, plus his UFC debut in March. Looking to build on that submission win against John Phillips, Byrd was facing Darren Stewart in Dallas, TX — a fighter who had only just snapped a three fight losing skid.

Stewart did not want to slip to 1-4, so getting the win was paramount. No easy task against a surging opponent. Byrd pressed the action early, firing off overhands, then looking to grab a leg for a takedown. That single leg attempt was fended off, however. They’d trade a bit longer, with Stewart then pressing Byrd into the cage only to be reversed. Byrd briefly took Stewart down, and as they popped back up, nearly had a standing guillotine in. He couldn’t get his hands together, however, and settled for a pair of elbows off the break. Byrd continued to display an edge in the striking department, mixing in kicks that seemed to catch Stewart by surprise.

Byrd would find himself in danger in the second round, however. After standing and trading, Stewart would catch Byrd, hurting him. And all of a sudden, that dominant first round from Charles Byrd was forgotten. It was a short elbow that hurt Byrd, followed by a right hand. Byrd was staggered, tried to escape, and covered up. Stewart landed another standing elbow, sending Byrd crashing to the canvas, and the fight was all over. Great comeback effort by Darren Stewart! 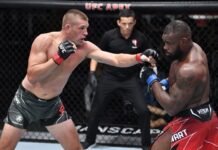