‘Alpha’ Cat Zingano got a massive monkey off her back at UFC Boise, returning to the win column for the first time since 2014, prior to her title shot against Ronda Rousey.

Former women’s bantamweight title challenger Cat Zingano continued to seek a return to her winning ways in Boise, Idaho on Saturday. There, the 135lb’er was set to face Marion Reneau, who at 41 years old was showing no signs of slowing down and had not lost in over two years.

Incredibly, it was former title challenger Zingano who was the slight underdog in her contest against Reneau at UFC Boise — but then, MMA is very much a “what have you done for me lately” sport. And it was Zingano eating a big counter right early that hurt her, stopping her in her tracks. Reneau looked to follow that up with a combination, and Zingano decided she’d prefer to take things down, scoring the first takedown of the fight. They wouldn’t stay down long, and back on the feet, Reneau clinched and drove Zingano into the fence. She took that opportunity to add in some elbows and knees in the clinch, while Zingano answered back with a knee. Zingano then secured a body lock, so Reneau jumped guard. That might have been a mistake, with Zingano landing in guard. However, she opted to back out. Zingano would fire off a leg kick; Reneau would miss with a head kick, and Zingano would connect low a few more times. A left hand then connected for Zingano, wobbling Reneau! However, Reneau recovered quickly, returned fire, and forced Cat back into the fence. Zingano would close out the round with a throw.

Round two saw Reneau come out and immediately rock Zingano! Zingano moved in for the takedown, and ‘Alpha’ scored it! This allowed Zingano to stay heavy on Reneau and gain a bit of recovery time. Zingano would eventually back off and allow Reneau to get up. A big leg kick then put Reneau off-balance, after which Zingano scored yet another takedown, this time off a trip. Cat looked to land some heavy elbows from the guard. On the feet again, Zingano went to the body with a kick.  She clinched and tried to power her way to a throw, but couldn’t out-muscle Marion Reneau. Cat would return to her leg kicks, but Reneau caught her with a jab. This time, when Zingano pushed forward for a takedown, she landed it. She’d finish the round on top.

The third saw Zingano open with a leg kick and come over the top with a punch. She then shot for a takedown; Reneau tried to pull guard and was slammed down to the mat for her troubles. Zingano worked to take the back, but Reneau rolled out of it, with Cat winding up in her guard. Zingano controlled from the top for most of the round, and while at one point Reneau had her arm trapped, she couldn’t make anything happen off her back.

A huge win for a clearly emotional Cat Zingano, who said post-fight that she wanted to avenge her losses — though singled out champ Amanda Nunes, who Zingano finished at UFC 178. 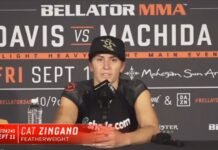 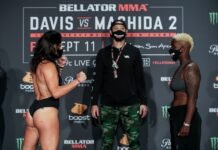 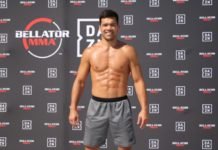