The wait is over! The Professional Fighters League will make its long-awaited season debut this Thursday night live from the Hulu Theater in Madison Square Garden. With names like Andre Harrison and Lance Palmer, the PFL is poised for a special season.

MMA is no stranger to the tournament format. The UFC was predicated on that very principle, albeit, many moons ago. Other promotions have since tried, namely Pride FC, and Bellator MMA, the former having the most success with the tournament structure.

“I feel like I’ve done a great job at being an advocate for the promotion for a long time.”

It’s fair to point out, however, the PFL will have a fight season consisting of two regular season fights- scored based on performance. At the end of the regular season contests, the fighter’s points will be tallied, and the post season bracket will be determined based on point totals (1-8), followed by the semi finals and finale which will crown six new millionaires.

Speaking with Cageside Press this week, featherweight Lance Palmer explained why he’s had to take the road less traveled t o get to this point, even when he didn’t want to.

One of Team Alpha Male’s best, Palmer was something of the face for the now rebranded WSOF. “Yea I feel like I was,” said Palmer of being the poster boy for the promotion.

“I feel like I’ve done a great job at being an advocate for the promotion for a long time. I’ve been with World Series (WSOF) since my eighth pro fight in 2013, we’ve grown together in many ways,” he continued. “I’ve grown so much as an athlete and fighter and now the WSOF has grown into an organization that is now the PFL.

Although the WSOF and PFL share several similarities, their methodology couldn’t be more different. “The biggest and most notable change is that it’s a season,” explained Palmer.

“Instead of it being a promotion where you fight and try to be the #1 contender, and then fight for the title and things like that, it’s turned into a regular season, post season, quarter & semifinals, and then the championship which is the million-dollar prize.”

The promise of a million dollar pay day at the end of the PFL fight rainbow has lured some very talented fighters over to the Ray Sefo-run promotion; for Palmer, however, a fight is a fight. “At the end of the day, you have to fight who is in front of you,” Palmer stated.

The man standing in front of Palmer Thursday night, of course, is Bekbulat Magomedov. Magomedov may not be on the casual fan’s radar, but the 19-2 Russian is one hell of a first round challenge for the Alpha Male fighter. “Magomedov is a super tough guy,” Palmer said of his next opponent.

“He is a 135er but the PFL doesn’t have a bantamweight class this season, so he is stepping up to featherweight. I’m expecting the best Magomedov.”

Looking through the featherweight roster, two names quickly jump out as the front runners or co-favorites to win the tournament, if you will: Andre Harrison & Lance Palmer. Adding to the intrigue of a potential million-dollar showdown between these two WSOF stalwarts, Harrison is the last man to defeat Palmer. “That would be pretty sweet if we got to fight in the finals,” Palmer admitted.

Tune in Thursday night to PFL 1 on NBCSN to find out if Palmer can indeed win his first fight for the season. 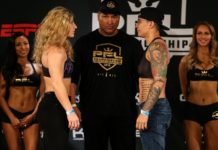 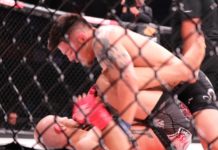