Ricky Simon turned a lot of heads in a stellar fight against Merab Dvalishvili at UFC Atlantic City. Yet the ending certainly raised eyebrows.

Atlantic City, NJ — Ricky Simon got into a hell of a war with Merab Dvalishvili Saturday night at UFC Atlantic City. The LFA vet and former Dana White’s Tuesday Night Contender Series fighter was making his debut, and made it felt in a big way. Ultimately, the back-and-forth war ended in a bit of controversy, as opponent Dvalishvili rode out a choke to the bell. Or seemed to. The ref waved things off at the bell. It became apparent, during the seconds that followed, that Dvalishvili was out. Ultimately, Simon was given the stoppage (a TKO via ref stoppage), to the displeasure of the crowd. Interestingly enough, Dvalishvili was ahead on two scorecards and would have taken the decision.

Talking reporters through the bout post-fight, Simon recalled that “I’ve never been beat up like that, in a round. So after the first I knew I had to keep it closer.” After that, the “second round was close. Third round, I felt like I needed a finish. I heard my corner, Fabiano, calling for that guillotine as he shot in desperately at the end there. I was choking him hard with everything I had. I was trying to stay calm in that guillotine.”

When the pair were separated, “I stood over his limp body at the end there, I saw his eyes rolling back.”

To some eyes, it seemed like Dvalishvili had gone out earlier in the sequence. Simon agreed. “I was yelling at the ref ‘he’s out, he’s out!'” Simon added.

So what’s next after the big UFC debut win for Ricky Simon?

He’s also coming for a bonus after a killer performance at UFC Atlantic City. “50Gs, that’s it, it was an exciting fight, an exciting comeback. I put somebody to sleep. Pay me!”

One thing Simon wasn’t a fan of was the East Coast crowd, however, who voiced their displeasure at his win. “Man, East Coast is not my favorite,” he said. “I love the Pacific North West. I love Washington, I love Oregon, East Coast I dunno. You guys can have your pizza and your Philly Cheesesteaks. I’m going back to the Evergreen State.” 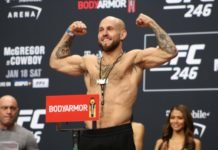 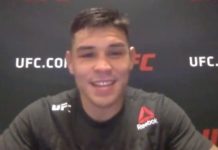 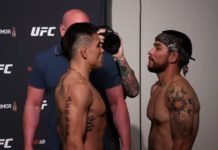