Signing with Poland’s KSW has paid off for for British heavyweight Phil De Fries. On Saturday, making his debut for the promotion after a brief stop in Bellator MMA, De Fries claimed gold at KSW 43 in Wrocław, Poland on Saturday. Facing Michała Andryszaka for the heavyweight title, De Fries got his Polish opponent to the ground early, and made short work of him, sealing the deal with strikes to pick up the TKO — and more importantly, the title.

This is how the new KSW heavyweight champion was crowned. #KSW43 pic.twitter.com/abamjDSGLV

In the co-main event of KSW 43, Damian Janikowski, bronze medal winner in wrestling at the 2012 Olympics in London, continued his undefeated streak in MMA, improving to 3-0. Wasting little time, the middleweight clipped opponent Yannick Bahati early with a left hand amidst a flurry of strikes. Unleashing a kick and another barrage of strikes, he managed to force Bahati to the ground, then controlled him from the back as he landed blow after blow just behind the ear. The end result, a quick TKO win for Janikowski, who looks to be a real star for KSW.

The main event of Roberto Soldic vs. Dricus Du Plessis saw Soldic, the promotion’s welterweight champ, knock down Du Plessis early, off a combo opened with with a right hand. A stoppage was in the air. However, Du Plessis would storm back, landing a powerful suplex, and taking the back then threatening with a choke to end the round. In the second, Du Plessis continued to find success, and soon connected with a powerful punch, dropping Soldic. Follow-up strikes would seal the deal, and Dricus Du Plessis captured the KSW welterweight crown! 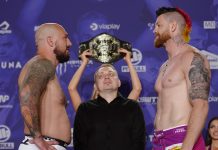