This June’s UFC 225 is quickly turning into a can’t miss event, with Lamas vs. Bektic the most recent addition.

UFC 225 continues to shape up into an excellent card. In another big addition to the event, going down this June in Chicago, featherweights Ricardo Lamas and Mirsad Bektic will face off. UFC officials have added the pairing to the card’s official line-up. There, it joins Curtis Blaydes vs. Alistair Overeem, Rafael dos Anjos vs. Colby Covington, middleweight champion Robert Whittaker facing Yoel Romero, and even CM Punk vs. Mike Jackson.

Better know as ‘the Bully,’ Ricardo Lamas (18–6) has long been a staple of the 145lb weight class. Despite losing to Josh Emmett his last time out at UFC on FOX 26, Lamas is 2-1 in his last three, with key wins over Jason Knight and Charles Oliveira. Lamas has put on some memorable performances in the octagon, and few will forget him throwing down with Max Holloway, who would go on to become champion in the division.

Mirsad Bektic (12-1) bounced back from the first loss of his career in January. After suffering defeat at the hands of Darren Elkins at UFC 209, Bektic returned at UFC on FOX 27 to finish off Godofredo Pepey. Overall, the Bosnian-American, who lives in the Chicago area, is 5-1 in the promotion. 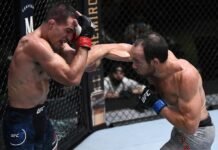 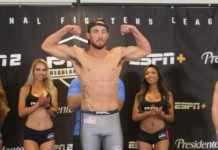