The UFC will make its inaugural trip to Santiago, Chile this May, and the promotion has announced a five-pack of fights it’s taking with them.

On Monday, the UFC confirmed that it would be making its first-ever trip to Santiago, Chile, marking a rare South American stop outside Brazil. The UFC’s debut in the Chilean capital will come May 19, at the Movistar Arena. In addition to announcing the date, the promotion also confirmed a number of fights for the card, which will serve as a Fight Night event. Among them, the long-awaited debut of Andrea KGB Lee, who signed with the promotion last year.

Among the newly announced bouts, Ultimate Fighter winner Tatiana Suarez will face Alexa Grasso in a strawweight bout that will determine which prospect jumps up the ranks. Grasso (10-1) has but one blemish on her professional record, a unanimous decision loss to Felice Herrig just over a year ago. She bounced back at UFC Fight Night 114 last August, taking a split decision against Randa Markos.

Suarez (5-0), meanwhile, won season twenty-three of The Ultimate Fighter at strawweight. After over a year away from the octagon, she returned last November to defeat Viviane Pereira and maintain her perfect record.

Also announced for UFC Chile, Diego Rivas (7-1) will take on Argentina’s Guido Cannetti (7-3). Both fighters previously appeared on The Ultimate Fighter: Latin America. Though he fought at featherweight on the show, Rivas recently made his debut at bantamweight. A native of Temuco, Chile, Rivas was also diagnosed with testicular cancer in 2016, overcoming the disease and returning to the octagon last year.

Moving up to lightweight, Chile’s Vicente Luque (12-6-1) will face Canada’s Chad Laprise at UFC Chile. Laprise, who won The Ultimate Fighter Nations: Canada vs. Australia at welterweight, will head into Chile on a three-fight win streak. There, he’ll meet up with Luque, who is coming off a D’Arce choke submission of Niko Price.

Back on the women’s side, UFC Chile had two additional fights announced on Monday. Brazil’s Poliana Botelho (5-1) will face Japan’s Syuri Kondo (6-0) in strawweight action. The fight will mark the undefeated Kondo’s sophomore outing in the UFC. And the long anticipated arrival of Andrea ‘KGB’ Lee will finally take place at UFC Chile. Lee (8-2) signed with the promotion late last year, after pulling double duty with both Invicta FC and LFA, where she served as the promotion’s flyweight champion. KGB Lee will make her promotional debut against Venezuela’s Verónica Macedo (5-1-1). 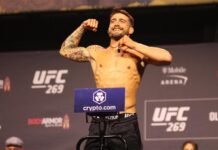