Israel Adesanya and Jussier Formiga were among the bonus winners at UFC 221 in Perth over the weekend.

UFC 221 wasn’t the card the UFC hoped to deliver for its debut in Perth. Without Australian middleweight champion Robert Whittaker atop the bill, something was clearly missing. Yet the main event delivered, thanks to Yoel Romero putting former 185lb champion Luke Rockhold to sleep early. Despite that performance, however, Romero was not considered for a bonus. That was a result of Romero missing weight for the main event scrap.

As a result, the promotion looked further down the card for the UFC 221 bonus winners. And it didn’t have to look all that hard. First and foremost came kickboxing sensation Israel Adesanya. Perfect in his MMA career coming into the night, his UFC debut, Adesanya also had 65 wins in kickboxing to his name, to just five losses. Saturday (or Sunday in Perth) he also claimed his 12th win in MMA. Adesanya survived an early onslaught of takedowns by Rob Wilkinson, then went to work on the feet, plastering Wilkinson’s nose across his face in the process. Eventually, Wilkinson crumbled under the constant pressure, with a final barrage of strikes taking the fight out of him. Just like that, Israel Adesanya had arrived in the UFC. He also proved to me more than comfortable on the mic, telling the middleweight division post-fight that “I’m the new dog in the yard, and I just pissed all over this cage.”

In a flyweight scrap that opened up the televised preliminary portion of UFC 221, Jussier Formiga executed a picture-perfect spinning back fist on Ben Nguyen to set up a rear-naked choke finish. Nguyen, as gritty as they come, refused to tap. But already stunned from the earlier blow, it wasn’t long before he went out.

Fight of the Night ultimately went to the main card battle featuring welterweights Li Jingliang and Jake Matthews. It was an action-packed, back and forth bout marred only by a blatant eye gouge from Jingliang, executed to escape a tight guillotine choke. 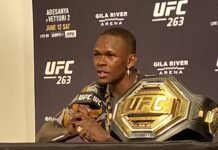 UFC 266: Tatiana Suarez Injured, Vows Comeback Will Be “Better Than Every Sports Comeback...