Justine Kish seemed on her way to a victory at UFC Charlotte, but the judges had other ideas, awarding Ji Yeon Kim the victory.

Justine Kish appeared briefly on The Ultimate Fighter and was even drafted until an injury knocked her out of the tournament. She ended up making her UFC debut two years later, defeating Nina Ansaroff and following that up with a win over Ashley Yoder. The Russian-American will be looking to bounce back from a loss to castmate Felice Herrig.

Ji Yeon Kim had an odd start to her career, fighting to a draw in her first two fights. The South Korean went on to win her next six fights with four stoppages, and earned a UFC contract. Kim fell to Lucie Pudilova last June in her promotional debut.

Justine Kish kicked things off with a right hand while Ji Yeon Kim stayed light on the outside. Kim flashed a right hand but missed. Kish pushed forward after Kim landed a right and threw hooks at Kim. Kim obliged and the two fired away for an exchange. The fighters separated and Kish landed a kick to the body.

Ji Yeon Kim landed a left as Kish was swinging and missing. Kish slipped on a high kick but Kim could not capitalize. Kish was the one pushing forward and landed a low kick then went to it again. Kish went low kick to right hook and landed. While Kim was more efficient and accurate, Kish was byfar the aggressor of the first round.

Justine Kish started the second round with a hard right hand and a couple of deflected high kicks. Kim landed a left, but Kish stayed in her face. A missed right by Kim led to a clinch from Kish but nothing came of it except for a right hand on the exit from Kish.

Kish threw a body kick then slipped a punch and landed a right of her own. Another solid right hand landed for Kish. Kim began to find her range, landing a right hand then a one-two. Kish closed the distance but again could not make anything of the clinch.

A hard right hand landed for Kish at the end of a body-head combination. Kish landed with ease again with a combination and Kim was unable to respond effectively.

Kish fired away at a pair of leg kicks to start the round, then a couple of sloppy spinning backfist attempts. An eyepoke paused action after an uppercut, and the pause in action fired up Kim. Kim began firing and looking for the knockout.

Hard hooks began to land for Kim and Kish was just eating them. Kish attempted to slow down Kim’s pursuit with a leg kick but Kim continued to push forward. Hooks landed for each fighter. Kish continued to work at the lead leg of Kim, and Kim’s offense was lessening as a result.

A combination landed for Kim as Kish landed a head kick. Kish landed a spinning backfist then put a stamp on the fight with a few knees to the body from the Thai clinch.

Despite seemingly dominating the first two rounds, Justine Kish did not leave with her hands raised. 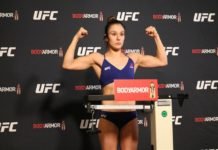