A.J. Matthews executed an effective game plan, attacking the legs and working his way inside on Kendall Grove at Bellator 193 on Friday.

Bellator 193 touched down in Temecula, CA on Friday, airing live on the Paramount Network. The second fight in on the evening’s main card saw Ultimate Fighter 3 winner Kendall Grove taking on A.J. Matthews. Grove had spoken candidly about losing his father and other personal losses prior to the bout. However, a secondary story line of Grove and Matthews being friends and occasional training partners also made their middleweight bout one to keep an eye on.

Matthews looked to work his way inside early on the much taller A.J. Matthews. However it was Grove landing a significant strike first, catching Matthews on the side of the head, though a slip made it look worse than it was. Matthews landed a leg kick, then went to the body moments later with another kick. Matthews continued to chop at Grove’s lead leg, utilizing both inside and outside leg kicks that landed with a crack. Grove was going to need to start checking some of those, and was already showing damage to the leg. Then it was time for Grove to fire off some offense, grabbing a Muay Thai clinch and firing off a knee.

Matthews, however, got the better of his opponent in round one. He pressed the action, controlled the cage, landed the greater volume of strikes, and his leg kicks were extremely effective. Round two saw more of the same. Matthews continued to find his way inside, avoiding the jab and counters of Grove. He continued to work in kicks, though with slightly less volume than in the first. Another problem for Grove, he spent a large chunk of the round backpedaling, allowing Matthews to be the aggressor.

Round three opened with one big question: was Matthews up two rounds, or was it a round a piece? While Grove had retreated through much of round two, Matthews’ output had dropped. In the third, however, an early exchange saw Matthews hurt Grove. Kendall would later have an opportunity to attack off an A.J. Matthews kick, but couldn’t capitalize. In the end, it went to the scorecard, and Grove was simply on his heels too much. A.J. Matthews picked up the split decision victory. 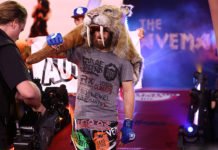 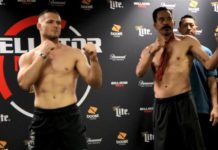