Jake Smith was making his Bellator debut Friday night at Bellator 193 in Temecula, CA. Smith, who trains with Chael Sonnen, faced Steve Kozola Friday at lightweight to open the card at the Pechanga Resort and Casino. Kozola, who went 8-0 to start his career, entered the night off his first loss as a pro, having dropped a decision to Carrington Banks at Bellator 184.

Smith, for his part, came into Bellator 193 off a split decision win against Scotty Hao under the King of the Cage banner.

This one was over in the blink of an eye.

The newcomer Smith was backed up against the fence early in the bout, but answered back with his power! A hard overhand right connected clean on Steven Kozola, buckling his legs. Smith connected with another right, and launched a left, as Kozola was on his way down. He followed that initial volley with a number of hammer fists as referee Frank Trigg moved in for the save. As quickly as it had begun, it was over, and Jake Smith had his first win under the Bellator banner, in his promotional debut! 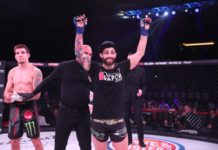 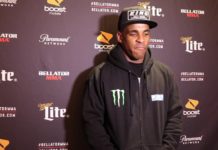 Lorenz Larkin Talks Tragedy, Getting Back Where He Needs to Be After Bellator 193 Win 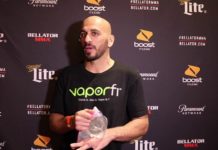