The TD Garden in Boston, Massachusetts played host to UFC 220 on Saturday, an event that saw Gian Villante square off with Francimar Barroso on the main card. Each fighter entered the night looking for a win, as Villante saw the wrong side of a split decision to Patrick Cummins last time out, while Barroso dropped a unanimous decision to Aleksandar Rakić at UFC Fight Night 115.

To start this light heavyweight affair, Villante took the center of the octagon. Both fighters looked to be feeling each other out. Villante shot a right hand that Barroso responded to with an uppercut. Barroso landed another big uppercut. Villante landed another big right. Back and forth, both fighters looked to be hunting that one big shot to end it. Barroso worked in some leg kicks as Villante continued to stalk him around the octagon. Gian Villante kept on looking the right, and Barroso was still working the leg kicks. The round ended with both men throwing a flurry of punches.

Round two, Barroso got off first with a quick jab but Villante was quick to take the center and worked his own jab, followed by a hard hook. Barrroso fired back with a kick and the two exchanged punches. After a quick break for an unintentional low blow, the pair exchanged blows as they slowly circled the octagon hunting for that big finishing shot. Barroso was firing leg kicks as Villante hunted for the knockout. Villante pressed the fight, keeping Barroso’s back to the fence. The pace of the action remained fairly slow with sudden outbursts of punches; both men were looking for the finishing shot. Neither finished the round strong.

Starting the third, once again Villante took control in center and fired off a right hand. Villante continued walking Barroso down with the Brazilian firing back via a hard body kick. Villante attacked with another combination of punches that sent Barroso reeling into the cage. Francimar Barroso recovered quickly, and Villante continued to stalk him around the cage. Barroso shot off a pair of kicks that Villante answered with pair of punches. Barroso then landed a solid right that Villante walked through. The final minute of the round saw Villante pursuing a retreating Barroso to end out the round. On the scorecards, it was close, with Villante getting the nod from two judges. 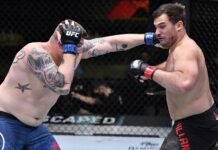 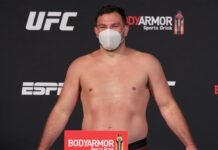 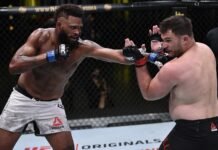