UFC and Bellator made some changes to their commentary teams, a strawweight was suspended before her promotional debut, and the last pay-per-view event of the year turned out to be a buyrate success. Huh?

Last week, Bellator MMA added former referee “Big” John McCarthy to their commentary team after letting go of long-time color commentator Jimmy Smith. Smith wasn’t unemployed for long, as the UFC signed him up before the week was over. While we wait for his debut, we can also wait for the UFC debut of Amanda Ribas. Ribas was suspended for two years by USADA. Oh, and UFC 219 was one of the most bought PPVs of 2017.

Despite some of the follies of human evolution (see: Hush Money), the development and growth of “huh” is something we should embrace. To be the change we want to see in the world, here are a few MMA stories last week that made us go “huh?”.

Bellator MMA got rid of color commentator Jimmy Smith, and then signed former referee “Big” John McCarthy to take his spot. Before the week was over, UFC added Smith to their commentary team. Huh?

Bellator’s move to release long-time commentator Jimmy Smith came as a surprise to everyone in the MMA world. Last year, the company brought in former UFC play-by-play man Mike Goldberg, as well as fan-favorite Mauro Ranallo. While they amassed a new team, losing Smith never seemed like an option the promotion would consider. So, who do you replace such a big name with?

How about legendary MMA referee “Big” John McCarthy? In another big move, bringing in McCarthy is exactly what Bellator did. McCarthy is joined by MMA veteran Chael Sonnen as the color commentary team going forward. McCarthy has also said he’s not necessarily retired from refereeing, and is on more of a “hiatus.”

It’ll be interesting to see what McCarthy brings to the table as a commentator. He’s been part of some of MMA’s biggest moments, and has an interesting perspective on those moments and the history of the sport. McCarthy isn’t just a spectator, though, as he’s earned his black belt in Brazilian jiu-jitsu.

But, what about Smith? That mystery didn’t have much time to develop, as it was announced Smith joined the UFC just a few days after his departure from Bellator. It remains to be seen just how Smith will fit in. The promotion’s current stable features Joe Rogan, Daniel Cormier, Dominick Cruz, Dan Hardy, and Paul Felder.

On first blush, Smith seems like the perfect long-term replacement for Rogan. Rogan has signaled his career as a UFC color commentator may be coming to a close sooner rather than later. Smith is one of the best commentators in MMA, and it’s hard to imagine he doesn’t fit right in, regardless of his initial role.

Amanda Ribas suspended by USADA ahead of UFC debut

After provisionally being suspended by USADA last summer, strawweight Amanda Ribas is officially out until June of 2019, before ever stepping into the Octagon. Huh?

The 6-1 Brazilian prospect was slated to make her UFC debut against Juliana Lima at the TUF 25 Finale card last summer. But, Ribas was pulled from the event after testing positive for ostarine. Ribas is still denying using the substance knowingly. She paid for the testing to help prove her innocence, to no avail. Huh.

“(USADA) requested everything that I was taking, all my supplements and medicine, because I was sick,” Ribas said. “They investigated if there was ostarine there, but it came back positive for other substance in the supplements, clenbuterol. (USADA said) that this result didn’t help me that much because I didn’t find ostarine.” – via MMA Fighting

While she waits for the suspension to end in June of 2019, Ribas plans on staying active. She cited competing at the Eddie Bravo Invitational jiu-jitsu tournament later this year as a possibility. Either way, it’s a bummer for up and coming talent like Ribas to be on the shelf for two years of their career.

Although it was hurt by the loss of a few major fighters, the final PPV of the year for the UFC was one of their most bought events of 2017. Huh.

Last year, despite what promotion president Dana White says, wasn’t the best for the UFC. While viewership declined across the board for the UFC, the final PPV of 2017 gives the company some hope heading into 2018.

Although it was a down year for the promotion when it comes to PPV buys, Cris Cyborg has proven her ability to draw viewers. All she needs is an opponent that can be advertised as legitimately competitive, like Holly Holm.

The promotion needs proven stars who they can count on to headline marquee events. While we might see the return of Conor McGregor in 2018, the UFC could use a star like Cyborg headlining a couple of PPVs this year. A matchup with current bantamweight champion Amanda Nunes sounds great. If the recent past is any indicator, could be one of the most-purchased events of the year.

The musical chairs of commentators between Bellator MMA and UFC continued last week, with some very surprising moves. While those moves were unexpected, UFC 219 being one of the top PPVs of the year also caught everyone off-guard. But, not as off-guard as Amanda Ribas. Ribas won’t be able to make her UFC debut until June of 2019 due to a two-year USADA suspension.

You're all hyped for the return of Safarov though, don't lie #UFC221 pic.twitter.com/joLSWJuvpA 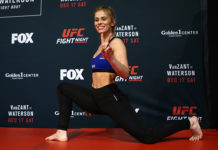