The shadow of Jon Jones has passed, and Daniel Cormier and Volkan Oezdemir will now battle in the first UFC title fight of 2018.

In April of 2015, Jon Jones was stripped of his world championship when he was involved in an illegal altercation. Since then, his return has shrouded the division. His comeback was always imminent, and the fact that he never lost his belt inside the cage meant the heir apparent would not be viewed as legitimate until they bested him in the Octagon. In 2018, the situation has changed. Jones’ future will be decided far from the cage and the division is no longer preoccupied with him as Daniel Cormier will face top contender Volkan Oezdemir in the co-main event of UFC 220.

Following his loss to Jones in July, Daniel Cormier admitted to needing time to do soul searching. In the time his rival was away, Cormier established himself as the best light-heavyweight in the world in defending his title twice. His status was unquestioned, and yet, his loss to Jones in 2015 hung over his reign. How could he call himself the best when he was defeated so handily without evening the score?

That night in July was supposed to change that. Jones had seemingly gotten past the demons that perched over him as he made his long-awaited return. Cormier was ready to prove that he was not the same fighter and legitimize the last several years of his reign.

After a competitive battle, Jones finished Cormier by TKO in the third round. A month later, Jones was flagged for a potential drug policy violation and was stripped once again of his belt. Cormier was now left in an uncomfortable position. The world saw him lose in his high profile bout, but the championship belt was still around his waist. The world did also know, however, that Jones had lost the belt through no fault except his own. As unfavorable as the circumstances were, the only thing Cormier could do was move on with his career as if Jones return never happened.

Prior to the grudge match, Cormier had rattled off four straight victories. Two of those were against feared knockout artist Anthony Johnson who had blazed a trail of destruction in the division. Cormier survived early onslaughts from the most heralded knockout artist in the sport to notch two submission victories. He also defeated the top-ranked Alexander Gustafsson in a competitive contest. Finally, albeit on short notice, he defeated pound-for-pound great Anderson Silva who replaced Jones on two days notice when the latter tested positive for banned substances in 2016.

Cracking into the upper echelon of the division has been impossible for the last several years. The line of Jones, Cormier, Johnson, Gustafsson and Glover Teixeira has been so impenetrable that all title shots have circulated among them since 2013. That is until Swiss newcomer Volkan Oezdemir crashed through the rankings to great surprise last year.

Oezdemir made his UFC debut on two weeks notice against then sixth ranked Ovince Saint-Preux. Per Bloody Elbow, Oezdemir at the time was preparing to fight for Titan FC at heavyweight when he received the call that the UFC was in search of an opponent for OSP. The rest has been well documented. Oezdemir won a close split-decision and earned his spot in the UFC. Several months later, he faced surging contender Misha Cirkunov and finished the powerful Latvian-Canadian wrestler in under a minute to alert the world to his potential.

His last outing was by far the most impressive as he faced knockout artist and number three ranked Jimi Manuwa. “Poster Boy” was campaigning for his own title shot and came in as a heavy favorite when Oezdemir survived his early onslaught to score another shocking KO in the first round. Occurring the same night as the Cormier and Jones rematch, Oezdemir has had the most to benefit from the entire situation. DC has already turned back number one ranked Alexander Gustafsson and the rest of the division is currently still far behind him. At a time when the division has been lacking for new talent, Oezdemir is breath of fresh air and finds himself with a chance to win the world championship just a year after entering the promotion.

Stylistically, the fight looks to be a striker vs grappler match-up. Cormier will look to get in behind his jab to tie up Oezdemir against the fence and drag him to the mat where he can use his Olympic-caliber wrestling to keep the Swiss striker on his back. We have yet to see what Oezdemir can do off his back but there is nothing in his career that suggests he will be able to defend a prolonged assault from Cormier.

For “No Time,” the key is going to be to keep the champion at the end of his punches. He has proven that he has knockout power but has never faced a fighter at the level of DC. While another early knockout is possible, it is more likely he will have to work to find an opening. The key will be to avoid throwing kicks that can be caught and using lateral movement to keep away from the fence. His best option is to keep the fight in the center of the Octagon where he can use his full height and reach to slip and counter the more compact Cormier.

A win for Cormier would put him alone at the top of the division. A title defense against Glover Teixeira could be next, though the public has also asked him to consider a return to heavyweight where he began his career and is still undefeated. For Oezdemir, a victory would turn the light-heavyweight division upside down as several vanquished contenders would immediately clamor for another shot at gold, though likely not before Cormier received an immediate rematch. Considering they are the precursor to the heavyweight clash between Stipe Miocic and Francis Ngannou, anticipation on the night could well hit a fever pitch as Cormier and Oezdemir finally collide. 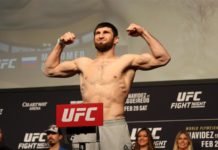