UFC President Dana White has big plans for a couple of title-fights in 2018, but some of the fighters involved are thinking a bit differently. Oh, and TJ Dillashaw isn’t a flyweight. Huh?

Last week, UFC President Dana White shared his thoughts on who promotional women’s featherweight champion Cris Cyborg should fight next, as well as what should happen in the ever-messy lightweight title-race. The problem(s)? Cyborg sees things a bit differently, and trying to predict what Conor McGregor will do next is a tough task. But, not as tough as cutting down to 125-pounds for UFC bantamweight champion TJ Dillashaw, who needs four months to make the flyweight title-fight limit.

Despite some of the follies of human evolution (see: Amazon Echo), the development and growth of “huh” is something we should embrace. To be the change we want to see in the world, here are a few MMA stories last week that made us go “huh?”.

Dana White says that UFC women’s bantamweight champion Amanda Nunes is the next opponent for women’s featherweight champion Cris Cyborg. Nunes is down, but Cyborg? Not so much. Huh?

Following her title defense at UFC 219, Cyborg meekly called-out contender Megan Anderson. That matchup has been in the works since last summer. Due to somewhat unknown issues, getting the duo in the Octagon hasn’t yet happened. Without Anderson, the list of legitimate challengers for Cyborg looks a bit bleak.

But, if you ask Dana White (and us), there’s a top-tier contender ready. The only issue is she’s the UFC women’s bantamweight champion.

Cyborg disagrees with White. Citing a lack of a true 145-pound challenger, the Brazilian would prefer to give a natural featherweight contender a shot at her title. It’s a sentiment that’s hard to argue with. Especially given the current landscape of title shots in the UFC.

The problem that Cyborg fails to recognize is that there is no women’s featherweight division in the UFC. There isn’t a number one contender. She’s it. That’s been the case since the division was created around a year ago, and the promotion hasn’t shown a willingness to sign female 145-pound fighters.

Cyborg’s solution? Pam Sorenson. Sorenson is 7-2 in her career, including going 1-1 at featherweight in Invicta FC in 2017. She’s not a terrible choice, but compared to Nunes, doesn’t make a lot of sense.

Nunes may not have competed at 145-pounds recently, but she has seven career featherweight fights. Nunes is 6-1 in those fights, with the loss coming in the first bout of her career. She even holds a victory over current Bellator MMA women’s featherweight champion Julia Budd. Huh.

Matchmaking with Cyborg is anything but easy. When done right, we get fun fights like at UFC 219. While Sorenson would provide a fresh face for Cyborg, a “superfight” with bantamweight champion and compatriot Amanda Nunes makes more sense for the fighters, the fans, and the promotion.

Although he claimed he could make 125-pounds in a matter of weeks last summer, TJ Dillashaw now needs four months in order to make the title fight limit for a potential bout with UFC flyweight champion Demetrious Johnson. Huh?

This was all over the course of a couple of months. The plan was for the bout to take place in August, following Garbrandt’s injury in late-May. That would’ve given Dillashaw somewhere in the region of 8-10 weeks to make the flyweight limit for the first time in his career.

Now, several months later, Johnson has his title-defense record, and Dillashaw has reclaimed his bantamweight belt. Dillashaw has continued to push for the bout, insisting that he can make the weight and give Johnson the toughest test he’s had in years. Except now, it’ll take Dillashaw four months to make the 125-pound weight limit. Huh.

If that’s the case, it makes Dillashaw’s claims of being able to make the weight last summer, which was Johnson’s biggest concern, less than believable. Johnson was derided the press by White, Dillashaw, and fans for sticking to his guns, and it seems as though his worries were justified.

Thankfully, now that the pressure is off, this fight can happen the right way. Neither champion has a true number-one contender to worry about, and Johnson-Dillashaw is one of the best pound-for-pound matchups the UFC can make in 2018, regardless of the weight it’s at.

So, give Dillashaw his four months, and we can enjoy what could be a Fight of the Year candidate sometime this summer.

We may finally be getting a (non-interim) lightweight title-fight

There are multiple UFC lightweight champions as we head into 2018, and Dana White wants to change that, even if it means stripping Conor McGregor of his title. Huh?

Khabib Nurmagomedov seems to be actually back, and after his performance at UFC 219, is deserving of a title shot. But, which title? There are currently two UFC lightweight champions, and both have their issues when it comes to fighting Nurmagomedov.

First, Conor McGregor. His issues aren’t so much with Nurmagomedov, as they are with MMA in general. He’s made it clear that he wants to return to the Octagon. Figuring out when that’ll happen is anybody’s guess.

Then, there’s Tony Ferguson. The interim 155-pound champ recently underwent elbow surgery, and has a troubled past with Nurmagomedov. The duo have been slated to fight three times since December of 2015, with no success. The most recent matchup was slated for UFC 209 last year, which would’ve been for the interim lightweight title that Ferguson currently holds.

This will all be taken care of this year, if you believe Dana White.

Expecting McGregor back by March is hilarious, as is the idea of the UFC stripping the Irishman of his title. It’s nice to know clearing things up at 155-pounds is on the to-do list, at least. Any matchup between the trio of Nurmagomedov, Ferguson, and McGregor sounds great.

They’re a few of the best fighters in MMA today, and getting them in action is something everyone can get behind. Especially if it means the mess atop the lightweight division is cleaned up by the end of the year.

UFC President Dana White has some ideas, but those don’t always come to fruition. Matchmaking with Cris Cyborg will once again be difficult. As will sorting things out at lightweight. Things seem a bit easier at flyweight, where a superfight between Demetrious Johnson and TJ Dillashaw looks to be likely. Either way, things are looking a lot more appealing in the UFC to kick-off 2018 than they did in 2017. 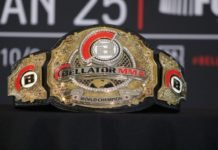