UFC 223 doesn’t have an official location just yet, but the card rumored for Brooklyn, NY may see the addition of Paul Felder vs. Al Iaquinta.

Paul Felder and Al Iaquinta may finally get their date in the octagon, according to a new report. The bout is currently being targeted for UFC 223. That’s per FloCombat’s Damon Martin, citing sources familiar with the situation. UFC 223 is expected to take place on April 7. No location for the event has been made official, but Brooklyn has been rumored as a front runner.

The pair were originally expected to meet at UFC 218. However, in late October Iaquinta pulled out of the bout due to injury. He was replaced by Charles Oliveira, who Felder (15–3) finished with elbows in the second round. That put Felder on a three fight win streak — all finishes, all by elbows.

Iaquinta (13–3–1) is currently on a five fight win streak, dating back to 2014. A contract dispute, stemming from Iaquinta’s dissatisfaction with his pay from the UFC, kept him out of the octagon for roughly two years, however. He returned in April, defeating Diego Sanchez. In recent weeks he was reportedly trying to renegotiate his deal to face Felder.

If the report pans out, it appears some sort of compromise was reached. No bouts have been announced as of yet for the UFC 223 card, though that is likely to change in the coming weeks. 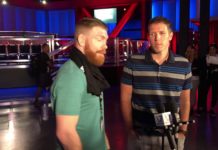