Max Holloway and Robert Whittaker took home gold in 2017, but which man is fighter of the year?

The term “breakout star” is one thrown around very frequently in sports. There were plenty of young upstarts this year like Rose Namajunas, Song Yadong, Alexa Grasso, and others making waves.  However, two men stood out from the pack as elite mixed martial artists: Max Holloway and Robert Whittaker. Both men currently hold UFC gold and dispatched dangerous foes in 2017. But fighter of the year can only go to one man.

Max Holloway fought only one fighter this year, but he gets credit for style as well as substance for how he handled both meetings with José Aldo. “Blessed” stopped the long-time Brazilian champion twice. In the first meeting, he overcame a strong first frame from the champion before dominating rounds two and three. In the second, he dominated from the opening bell and showed that even Aldo’s kicks could not make a difference in the outcome.

He has won a dozen fights in a row, but the last two are more of an exclamation point over the previous ten. Holloway has defeated top-ranked fighters like Jeremy Stephens, Anthony Pettis, Ricardo Lamas, and Cub Swanson en route to UFC gold. Arguably, the only fight for him to clean out the division is with former lightweight champion Frankie Edgar. Contenders like The Korean Zombie and Brian Ortega have ground to cover in 2018 before they can be considered ready for the elite. That leaves Holloway on the verge of a virtual sweep of the division.

Exactly how long “The Blessed Era” will last remains to be seen. However, a strong 2018 would arguably make him the greatest featherweight of all-time. The one caveat to his run is a loss years ago to Conor McGregor. McGregor obviously went on to win the featherweight title before vacating the belt for the lightweight division. The fact is not lost on anyone, as evidenced by both men referencing the fight recently on social media. If “Blessed” has a successful year, ideally with wins over Edgar and Swanson, it could well change the narrative that McGregor is avoiding a rematch with the evolved Hawaiian champion.

I miss those sunglasses. pic.twitter.com/0fa7U9dM4Y

Miss the sunglasses? I bet you also miss 2015 brother. Retired fighters love the past. pic.twitter.com/UWGnJG2KEe

Max Holloway had an amazing 2017, but one man also emerged to the ranks of the UFC elite. Robert Whittaker rode a six-fight win streak going into 2017, but had his breakout performance in April when he faced “Jacare” Souza. The vaunted middleweight specialist was 10-1 in his last eleven fights and was on the cusp of a title shot himself. Whittaker had never faced a grappler near Souza’s caliber, but he passed the test with flying colors as he defended the takedowns of the Brazilian and scored a knockout in the second round.

That victory set up a fight for the interim middleweight title when he faced feared Cuban Yoel Romero. Romero was unbeaten since 2011 and had rampaged through the division since arriving in the UFC. All signs were pointing toward a clash with then-champion Michael Bisping until injuries and Georges St-Pierre’s return pushed those plans aside.

Whittaker survived two strong rounds from Romero to win the final three, including a razor close fifth round. Even more impressive was that Whittaker had suffered an injury to his knee and required surgery after the fight. St-Pierre would go on to win the undisputed title from Bisping and less than a month later vacate the belt. Robert Whittaker is now the undisputed champion of the middleweight division and his first defense is scheduled against Luke Rockhold in Australia early next year. 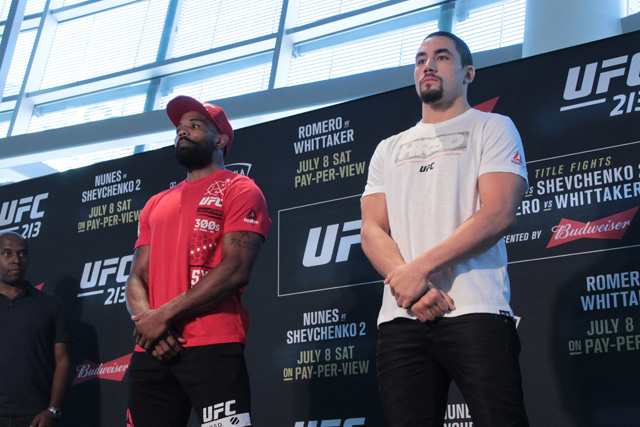 The other contenders for Fighter of the Year fall slightly behind based on their body of work. Most of the UFC’s champions were held to one title defense apiece. Demetrious Johnson continued to make history, but both outings played out exactly like the mismatches they appeared to be from the beginning. Tyron Woodley had impressive victories to defend his title but was criticized for the lack of action in both bouts. That leaves Holloway and Whittaker to compare which campaign was more impressive.

By the numbers, Holloway has a slight advantage. He competed in two title fights compared to Whittaker’s one. Also, Aldo pound-for-pound carries more weight as an opponent than Jacare and Romero. Whittaker’s appeal lies in watching his ascension in 2017. He was an exciting contender, but to see his evolution tested against different foes was more novelty than what was already an impressive run for Holloway.

Both men are poised for big years in 2018, which should give fans plenty of reason to rejoice. For now, who do you have as being fighter of the year?