A pair of Ultimate Fighter teammates put camaraderie aside Friday to face off in the octagon.

At Friday’s The Ultimate Fighter 26 Finale, former TUF teammates DeAnna Bennett and Melinda Fabian threw down. While Bennett held a significant advantage in experience (both in fights and quality of competition), Fabian was looking to hold her own. Would she?

The bout went down as part of the main card of the TUF 26 Finale, held at the Park Theater in Las Vegas, Nevada.

Fabian opened landing a couple quick strikes, then moved into the clinch on the cage. The two exchanged knees while working for position. Bennett worked for the take down and Fabian defended it well. The action get back to the middle of the cage, where Fabian started to land some rights that backed up Bennett; she then countered with a take down attempt, driving Fabian into the cage once again. Both women worked for position once again and once the two separated, Fabian landed a big head kick dropping Bennett to end the round.

The second round saw Fabian look to bring the pressure, and once again Bennett moved her into the fence and back into the clinch. The two worked in the clinch with Bennett going for a single and Fabian defending, grabbing the fence and causing Big John to step in and take a point for the infraction. The action resumed back on the fence with Bennett again working for the take down and Fabian defending until the two were broken up. Bennett immediately shot in driving Fabian into the fence to work the take down, with Big John once again needing to break up the action. Rinse, repeat. Bennett immediately shot in and drove Fabian into the cage to end the round.

The final round opened with Bennett throwing a high kick followed by a punch combo. Fabian started to press Bennett and landed some stiff strikes until her kick was caught by Bennett and she was driven back into the cage. The two worked in the clinch with Fabian defending while throwing some knees until they two are broken up again. Back in the center of the ring Fabian landed a body kick that Bennett replied to with, you guessed it, she shot in driving Fabian into the fence. The two broke again and started to exchange with Fabian getting the better until Bennett landed  a strike that sent Fabian to the mat to end the final round. It was the first bout of the night to hit the scorecards, ending in a majority draw. 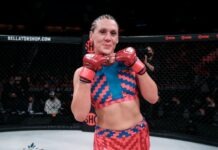