It was wrestler versus submission wizard at Bellator 189 in Thackerville, Oklahoma on Friday.

A pair of top Bellator middleweights were set to face off a Bellator 189 in Thackerville, OK on Friday night. In a key bout for a division buoyed by the arrival of Gegard Mousasi, undefeated BJJ ace Rafael Lovato Jr. put his perfect record on the line against Chris Honeycutt.

In a methodical first round, the pair went through a feeling out process, with Lovato Jr. showing he wasn’t afraid to stand with Chris Honeycutt. Going as far as to launch a flying knee attack, Lovato showed he was a well-rounded mixed martial artist. Honeycutt, meanwhile, fell back on his wrestling, pinning his opponent against the cage in the latter half of the round. The big question was whether he would want to take the fight to the ground with the dangerous submission specialist. A standing guillotine defense by Lovato Jr. managed to keep the fight standing in the dying seconds of round one.

Round two saw Honeycutt looking for the takedown, but once again Lovato Jr. utilized a standing guillotine to defend the show. The submission specialist, however, was determined to stay on the feet rather than pull guard against the wrestler. A jumping front kick and spinning back fist attempt moments later displayed the varied arsenal of a fighter best known for his submissions. Honeycutt, however, finally got the fight to the ground at the halfway mark of the second.

With the fight on the canvas, Lovato Jr. immediately began looking for submission opportunities. With Honeycutt unable to make much progress, the ref soon opted to stand them up. When the action went to the fence again, Lovato switched to a kimura rather than a guillotine, but either way, he stayed standing.

The third saw more of what had been a stalemate in the takedown department. Nearly every time Honeycutt pressed for a takedown along the cage, Rafael Lovato Jr. was able to threaten with a standing guillotine or kimura to keep on his feet. Honeyctt, however, would score a couple of brief takedowns on round three — but was unable to stay in control or do any damage. 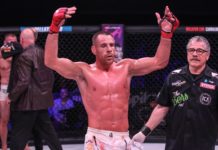