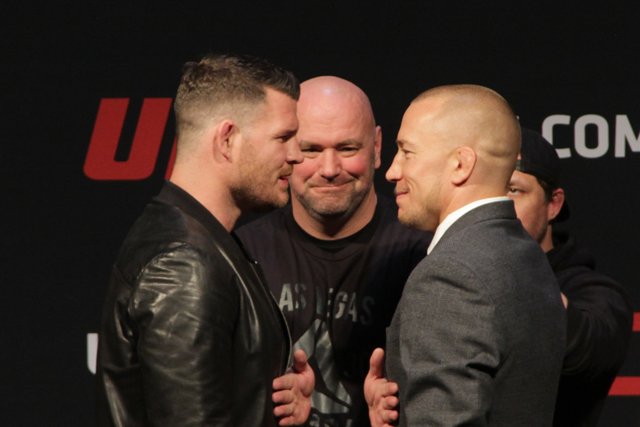 UFC 217 contains three title fights for the promotion’s second trip to Madison Square Garden, and Cageside Press has their picks set for the huge event.

UFC 217 is headlined by the long-awaited return of all-time great Georges St. Pierre, as he looks to take the middleweight title from Michael Bisping. In addition to that, this card guarantees excitement, with a loaded pay-per-view slate that has three titles on the line and a possible number-one contender spot.

Georges St. Pierre has not fought in four years. Many had him losing on the scorecards in his last bout. He is moving up to a division that he has not participated in ever. Despite these factors, Cageside Press favors the legend against the UFC middleweight champion Michael Bisping by a margin of seven to three.

The co-main event between Cody Garbrandt and TJ Dillashaw has generated the most hype on the card, given their history as former training partners and sheer skill level of each. If you’re a proponent of MMA math, TJ Dillashaw came up short against former champion Dominick Cruz while Cody Garbrandt dictated his fight against Cruz and won in incredibly impressive fashion. Cageside Press rejects MMA math, with only three writers picking the current champion.

The first of three title bouts at UFC 217 is between Joanna Jedrzejczyk and Rose Namajunas. Jedrzejczyk is as dominant as they come. The Polish striker holds a 14-0 record and seeks her sixth title defense. Namajunas earned a shot at one of the UFC’s finest with a nasty submission over Michelle Waterson that was preceded by a beautiful head kick. According to Cageside Press, the dominance continues with seven writers favoring the champion.

A possible top contender in the welterweight division will be determined when Jorge Masvidal meets Stephen Thompson. Although both are coming off losses to top opponents, there is no denying the greatness of either fighter with combined UFC records of 17-7-1. The bad taste of Stephen Thompson’s previous performance against Tyron Woodley may still be in the mouths of Cageside Press, as Masvidal is favored six to four.

The first fight on the main card of UFC 217 is a confusing one. Paulo Borrachinha has torn through his two UFC opponents so far with unbelievable power, while Johny Hendricks is a shell of the fighter that had the welterweight title around his waist nowadays. Hendricks is 3-6 in his last nine fights, and Cageside Press believes that will get worse, unanimously picking his Brazilian foe.