Bellator light heavyweight champion Ryan Bader put his title on the line for the first time Friday, taking on Linton Vassell in the main event of Bellator 186. Could the American fend off the British invasion in front of a big crowd at Penn State’s Bryce Jordan Center?

Bellator 186 represented one of the promotion’s biggest cards of the year. With two title fights and a number of notable names, it was set to be an action packed night. In the co-main event, Hawaiian Ilima-Lei Macfarlane captured women’s flyweight gold, submitting Emily Ducote in the first ever Bellator women’s 125lb championship fight. Penn State alums Ed Ruth and Phil Davis were both winners on the night as well.

In the main event, however, all eyes were on Ryan Bader as he looked to defend his title for the first time.

It wouldn’t take long for Ryan Bader to shoot for his first taken, as it came after an early exchange within the first minute. He’d wind up securing a throw in the center of the cage, and from there show smart positional wrestling, using head placement and upper body strength to control Vassell. Vassell, however, would make it back to his feet, and they’d reset with three and a half minutes remaining in the round. Vassell then connected with a hard kick to the body, and touched Bader’s chin for the first time. Bader fired back with some hard strikes, but a firefight might actually favor “The Swarm.” Another hard kick from Vassell landed, and Bader had seen enough, changing levels on the next attempt and landing a double leg. Vassell had little to offer on the ground, as Bader was able to drag him down again late in the round and land a crushing knee against the cage.

You could hear the air go out of Vassell when that knee landed at round’s end.

Bader opened the second with a kick, then used a leading jab to secure another takedown. Sticking with his bread and butter, he stacked Vassell against the fence, then looked to create space in which to land ground strikes. A knee to the chest seemed to get Vassell’s attention about halfway through the round, but he remained unable to escape, and was soon eating punches while flailing from the bottom. He risked giving up the back, opted not to, but it was the beginning of the end. Bader began dropping bombs from the top as Vassell covered up and rolled to his side, and soon the ref had seen enough.

Earning the stoppage in the second round, Ryan Bader had his first successful title defense! 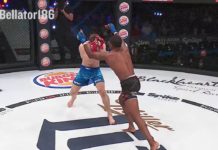 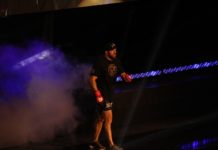 Bellator’s Ryan Bader Talks Moving to Heavyweight, Would Love to Be Two-Division Champ 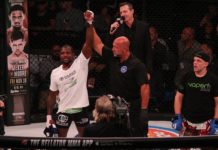