Both fighters entered the cage ridding coming off of recent successes.

The “Texecutioner” James Vick entered the octagon for the ninth time on Saturday, riding a two fight win streak with recent wins over Abel Trujillo and Marco Polo Reyes, the latter a TKO finish.

Joseph Duffy also entered the night carrying a two fight win streak of his own. With wins against Mitch Clarke and his most recently Reza Madadi, Duffy looked to extend his run at UFC 217 with a win over Vick.

A solid fight to close the prelims, Duffy came out and pushed the pace. Vick put his boxing skills to work and answered with the jab. Duffy continued to put on the pressure, with leg kicks and combos, but for Vick his jab was always there. Duffy tried changing levels and Vick responded with a push kick that was caught and driven into a double leg by Duffy. Once the two hit the canvas Vick was looking for the choke and the round ended shortly after.

The second round saw much of the same, however the scales slowly started to tip in favor of Vick as he began to put together his punches, find his distance and really get behind his jab. Duffy looked to be slowing down but still had plenty of fight left, that was until a smashing right from Vick dropped him to the canvas. Vick pounced for the finish with the ref needing to jump in and call it — officially a second before the end of the second round. 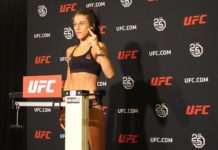 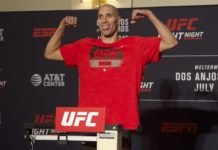