Beating the UFC to the punch, Bellator hosted its inaugural women’s flyweight championship bout at Friday’s Bellator 186 at Penn State.

There was a lot more on the line Friday, with a chance to claim flyweight gold in the promotion. With it, the bragging rights, and glory as the first flyweight champ across North America’s two biggest MMA outfits.

Just after the opening bell, their pair would clinch, with Macfarlane looking to land a knee to the body. She would press the action, forcing Ducote back against the cage. Ducote would look to circle away, but Macfarlane stalked her like a wounded animal, and landed some hard shots before utilizing a Thai clinch briefly, then taking Ducote down against the fence. Macfarlane would attempt a choke, then opt to drop elbows when that failed. A kimura attempt came next, and as Macfarlane worked the arm Ducote showed off her defensive skills, but the round was dominated by the Hawaiian.

Emily Ducote would work the legs to open the second round, looking a bit fresher than expected until Macfarlane landed a right. Ducote began throwing more volume, with a number of combinations being key to her success in round two. Curiously, Macfarlane seemed to sit back and allow Ducote to dictate the pace.

The third saw Ilima-Lei Macfarlane pushing the pace early, back on the offensive. She connected with a number of punches from the clinch and looked to add knees to the midsection of Ducote. Ducote answered back with knees of her own; back at range Macfarlane demonstrated better movement and superior accuracy, once again landing with volume. The second half of the round, however, would be eaten up in a clinch against the cage that ultimately ended in Macfarlane scoring a double leg takedown with roughly twenty seconds to go.

Heading into the championship rounds, it was still anyone’s fight. Ducote pushed early, with the Hawaiian looking to counter. Macfarlane’s strikes came with more power behind them, while Ducote was throwing more. Strikes landed, mind you, was another story. A Macfarlane right would connect towards the final minute, which would lead to a throw, with Ducote winding up on top as the clock wound down. Not to be outdone, however, Macfarlane unloaded with some vicious elbows from the bottom.

The fifth and final round saw Ducote rely on combos to set up her kicks, and Macfarlane initiate a takedown early that saw Ducote wind up on top. Macfarlane looked to be working for a triangle at times and soon was able to tighten things up, catching Ducote in an arm-bar and leaving her unable to escape!

With that, Ilima-Lei Macfarlane earned her place as the first ever female champion at 125lbs in Bellator MMA! 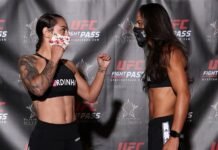