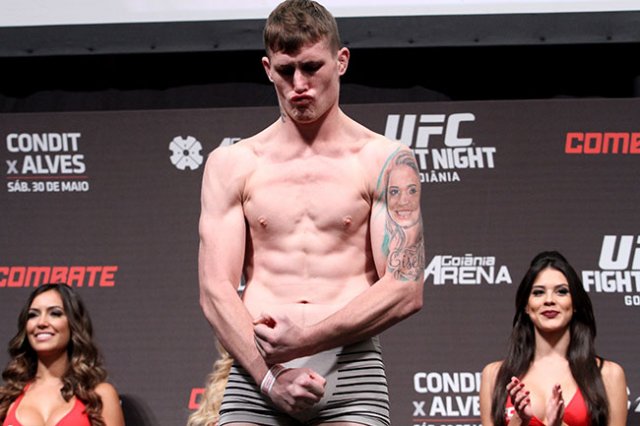 UFC Gdansk comes to MMA fans in the middle of the day, and Cageside Press has their picks ready for the four-fight main card.

UFC Gdansk has a good mix of pick results, with a pair of one-sided predictions, and two closer to even. However, there was not one unanimous pick for the Polish main card.

The main event features up and coming Brit Darren Till taking on longtime veteran Donald Cerrone. Darren Till has been very impressive in his undefeated 16-fight career, stopping eleven opponents. Till is 3-0-1 in the UFC and is on a two-fight win streak. Donald Cerrone finally cooled off after his blistering start at welterweight, suffering losses to Robbie Lawler and Jorge Masvidal following his four-fight win streak (believe it or not, that is the first time Cerrone has lost consecutive fights in his 42-fight career. Cageside Press favors Cowboy just barely, with six of 10 writers picking the UFC staple.

Karolina Kowalkiewicz looks to recover from a two-fight losing streak of her own in her home country of Poland. She will welcome WMMA veteran Jodie Esquibel to the Octagon. Esquibel was 4-2 in Invicta FC with a win over TUF contestant DeAnna Bennett. Cageside Press is heavily in favor of Karolina Kowalkiewicz, with only one writer going against her.

Devin Clark and Jan Blachowicz will battle in an exciting clash of light heavyweight strikers. Devin Clark was found on Dana White’s Lookin’ for a Fight and is on a two-fight win streak since his disappointing loss in his UFC debut. Jan Blachowicz has struggled to showcase his skills in the Octagon. The Polish striker has flashes of brilliance, but is only 2-4 in his UFC career. All but one of Cageside Press’s staff believes the trends will continue, and Devin Clark will leave the victor.

Opening the main card is Jonathan Wilson vs. Oskar Piechota. Piechota is from Gdansk, and has a very good record of 9-0-1, with all wins via stoppage. Piechota does not discriminate, with four knockouts and five submissions in his career. Wilson started his UFC career with a thunderous first-round knockout, but has since lost twice to tougher competition. It was a slim margin, but six writers favored the hometown favorite in Piechota.