Now approaching his seventh bout in his second go with the Bellator MMA, has Georgi Karakhanyan felt any pressure to come back and preform in a big way, especially having found success outside the company?

“Yeah, I was pretty surprised when I signed with Bellator and they gave me Bubba Jenkins” he explained. “Bubba was a good wrestler, and for some reason since the beginning of my career I’ve been fighting all these crazy wrestlers. I was mixed, I was like ‘okay, these motherf*****s signed me to lose to this wrestler, they’re trying to build this wrestler up’ so I had to come there, I had to make a statement, and that’s what I did. I beat Bubba not just once but twice.”

“I think going into every fight, you want to go in there with pressure but don’t put too much pressure [on yourself]” he added. “I tend to deal with pressure really good. Of course I had to make a statement. As a fighter, that’s what you have to deal with your whole career, so it wasn’t a problem.”

At Bellator 182 on Friday, “Insane” meets up with Daniel Pineda (22–12), a former UFC and Legacy FC fighter who actually appeared all the way back at Bellator 6. It’s a match-up Karakhanyan feels will be explosive.

“The match-up with Daniel Pineda is great. I think he’s a good fighter, well rounded, I think we match up great. It’s going to be fireworks” the fighter promised, adding “I’ve been saying it’s going to be a slugfest, I’m trying to make it a bloody fight.”

If Karakhanyan comes out on the right side of those fireworks, there’s the featherweight title picture in Bellator to consider, something that has essentially consisted of Daniel Straus, Patricio Freire, and Pat Curran in recent years. It’s a three-way dance that feels as if fresh blood is needed. Freire currently resides as champ, and holds a win over Karakhanyan from his first run in the company, back in 2011. Curran has piled up a couple of wins including one over Karakhanyan, but has been out over a year, returning in the fall. What’s Karakhanyan’s take on the situation?

“I think, [with] good exciting fights, exciting finishes, the title will come. Just like you said, the title scene, Pitball-Straus 4 or Pitbull-Curran 3 or however many times they’ve fought, there needs to be change, and it will come soon. I’ve just got to win a few fights, and I think my time will come.”

Not to look past Pineda, but with the title picture so tight, who else is on the radar?

“I tried to fight Josh Thompson, but he’s too old, he’s fading and has his own podcast. I tried to call him out but that didn’t happen” he explained. “I’m very vocal that I want to fight at ’55. That being said I’ve been fighting in Bellator too long and fighting all these tough fighters, to me it doesn’t matter — I’m here to fight all these tough fighters, whoever they give me.”

“After this next fight, hopefully I’m not too injured, too beat up, and hopefully I fight again by the end of the year.”

And when it comes to weight class? “45, 55, 160, 165 but not 170” he said with a chuckle. With the CSAC having recently introduced new potential weight classes, later approved by the Association of Boxing Commissions, are the new classes of interest?

More weight classes led to talk of boxing, and the number of MMA fighters calling out boxers. Karakhanyan has some experience in that realm, so what’s his take on it all? Are MMA fighters over-estimating their chances in the ring?

“I think they are” Karakhanyan answered, and continued.

I spar with Dennis Laurente, he’s one of Pacquiao’s main sparring partners before. It’s a different world. These guys shadow box while they’re sleeping, these guys jump rope while they’re sleeping, they work on footwork while they’re sleeping. So it’s a different world. You can’t compare MMA and boxing. Yeah MMA is hard and you have to worry about wrestling and all the other stuff, but boxing is boxing. Ever since Mayweather and Conor [were announced as fighting], all these MMA fighters are just talking s*** about boxers, calling them out left and right. Respect for boxing… I mean respect for MMA is already gone. MMA is not the same way it was before. A lot of people are just trying to be Conor McGregor, talking s***, becoming match-makers, calling fighters out on Instagram and Twitter. To see all these fighters talk s*** to these legendary boxers, legendary fighters that have way too many fights, it’s sad to see that. But that’s how the world is going. A lot of people think Conor is going to knock out Mayweather, which I think is a big mistake. I feel like Mayweather is going to destroy him, he’s going to play with him.

As for Karakhanyan’s own fight? “I can’t tell you if it’s going to be a knockout or submission. I’m just ready for anything. I guarantee I’m going to be there fighting one hundred percent. I’m going to give it all I’ve got, where ever it is, if it’s a bloody fight, if I get dropped, come back up and knock him out — I’m looking for war.” 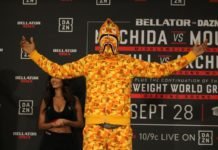 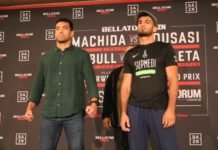 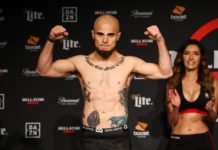