“Rowdy” Bec Rawlings will be joining the flyweight ranks for her next fight. The Ultimate Fighter and Invicta FC veteran, who missed weight in her last strawweight bout against Tecia Torres in February this year, will be meeting the popular Joanne Calderwood at UFC Sydney. The UFC announced the bout Wednesday.

Rawlings (7–6) has lost two straight including the loss to Torres. Prior to the Torres fight, she suffered a highlight reel knockout via switch kick at the hands of Paige VanZant. The Australian native has spoken openly on social media of her struggles and desire to fight at flyweight in the past. She’ll now get just that opportunity at UFC Sydney, a.k.a. UFC Fight Night 121.

For Calderwood (11–3), it’s a return to 125lbs after she participated in the first ever UFC fight in the weight class. That fight, at UFC Ottawa a year ago, was a one-off until the promotion recently announced it would launch the division, with a champion being crowned at the finale of The Ultimate Fighter 26, the competitors on which will populate the women’s flyweight ranks. Since defeating Valerie Letourneau in Ottawa, Calderwood has fought twice at strawweight, losing both. She also missed weight her last time out against Cynthia Calvillo in Glasgow. 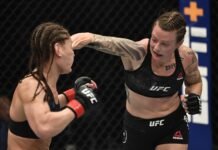 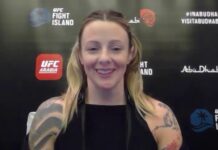