Bellator 182’s Kevin Casey will be making his sophomore appearance with the promotion on Friday in Verona, New York. His promotional debut back in January at Bellator 170 ended in a draw, the second of Casey’s past three bouts. On Friday, the middleweight will square off against Chris Honeycutt in a key middleweight battle. The aim this time is to leave nothing to chance, and Casey spoke with us ahead of the bout about the fight, getting back in the win column, and more.

Casey came across a lot of MMA fan’s radar thanks to his appearance on the star-studded Ultimate Fighter 17, the season that featured Kelvin Gastelum, Uriah Hall, and Josh Samman, among others. Casey’s proud to have been part of that season, which was a standout for the show. “There were exciting moments that still haven’t been topped in that season” he told Cageside Press. “In my opinion, that’s one of the best seasons ever.”

Of course he’s now under the Bellator MMA banner, under the familiar leadership of Scott Coker. Early in his career, Casey had a couple of fights as part of the Strikeforce: Challengers series.

It’s been a long road since then. More recently, Casey has struggled to get the judges to see things his way, having fought to a draw in two of his last three fights. Has that forced him to make any changes to his approach?

“One hundred percent. I’ve come to the understanding, the realization that as a fighter, and as an athlete, I have to raise my fight IQ” he explained. “I have to fight intelligently. Because there are a lot of different outside influences that effect a fight.”

Casey used his Bellator debut as an example of why, noting that there were a lot of factors at play, including the new scoring system, and the influence of the ref.

We’re not just talking two people, two athletes entering into the cage and fighting and it being a realistic display. We’re talking about a situation, for example, my last fight, I fought Keith Berry, Bellator 170. I believe I got a 10-8 in the first round, knocked him down twice, put him on his back, delivered some damage, the guy was tough to put away. In the second round, I came out, I had to reserve myself a little bit because I put out so much energy in the first round, I scored a takedown, and as I started to build up some momentum, I was dropping elbows, the referee, who ultimately is an outside entity, an outside influence that has a dramatic effect on the outcomes of fights, decided to stand up my opponent. He stood up the fight because of something that had nothing to do with the reality of a fight. He stood up the fight because of production values. He felt that ‘if I don’t stand up this fight, nothing’s happening, the crowd’s going to get bored, they’re going to boo, and that’s bad for entertainment, that’s bad for this show’s production.’ So he chose to assist another fighter, where ultimately that’s so far from reality. The reality of the situation was that this opponent who was on the bottom doesn’t have the skill set to escape, doesn’t have the knowledge to escape, he doesn’t have what it takes to get the job done. He should be losing the fight, but because of some other situation or influence, he’s assisted.

Casey continued, saying “it’s disappointing where you knock someone down twice, you get the takedown, you’re never under control, you never have your back on the floor, you never have your back on the cage, and at the same time, they’re implementing a new scoring system, and then you end up getting a draw.” As a result, “I can’t just go out there and get excited and try to put on the greatest show. Maybe I have to be a little more patient, a little more defensive sometimes, and be a smarter fighter.”

What does that sort of outside influence, especially from a ref, do to a fighter? “It’s crushing” Casey said. “[The ref] should be there for our safety. That’s what the referee is ultimately about, he’s there for safety. To protect someone if they’re in a position where they’re going to get hurt and they can’t defend themselves. That’s what refereeing is about. But we have these blurred lines due to the production values of a show, or the feeling that we have to provide the most exciting show for these blood thirsty fans who won’t learn or get educated in what’s going on, at what level of skill it’s happening on at any given time in a fight. They just want to see knockouts, they just want to see that, so they devalue certain aspects or certain disciplines when it comes to being in the cage.”

“It took me years of training to learn how to control a professional who is skilled in his own right, and hold him there, whether it’s delivering five shots in sixty seconds, or fifty” he explained further. “It took me years to learn how to do that, it’s a skill. For someone to not be skilled and be able to defend themselves in that way, and then get an assist from an outside influence, it’s just frustrating.”

With that in mind, does Casey believe we’ll get to a point where the casual fans drop the “just bleed” mentality many seem to have?

“A lot of it comes from the pressure from the promoters” Casey believes. “Sometimes, you have a promoter who’s not in support of a certain discipline. I remember going into the Ultimate Fighter finale, Dana White had all the participants back in the locker room. One of the first things he said – you have to take into consideration, my pedigree is grappling – and Dana White said ‘I don’t want to see anybody go out there and just lay and pray on someone’ which was kind of a reference to grappling and smothering your opponent and ultimately wearing you opponent down so you can do damage.”

“That was my style. To feel that coming from the guy who I’m here to impress put a certain amount of pressure [on him].” Casey then chose the recent Woodley vs. Maia title fight as an example of how certain aspects, certain disciplines within MMA are not appreciated.

“Tyron Woodley and Demian Maia, we’re talking about Demian Maia, one of the best grapplers ever to be in mixed martial arts, and Tyron Woodley stuffed I think 17 of his takedowns” Casey said. “You’re telling me this athlete received criticism for stuffing however many takedowns it was in a professional fight against one of the best guys, who makes people look like kids when he grapples? And he’s not getting any acclaim for that, he’s getting criticized because he didn’t put himself in a situation to lose the fight?”

Is there any simple answer then, for fighters who are in a difficult situation, torn between putting on a show and getting a much needed win? As Casey sees it, “At the end of the day, Dana White does his job. His job is to promote and put on exciting fights. That’s why the UFC has gotten to the level it has gotten to. He’s only concerned with his job, but as a fighter who could be put on the chopping block, you should do the same. You should go out there and be concerned with your job, and that’s to win a fight.”

Having worked with Strikeforce, the UFC, and Bellator, Casey has dealt with the two biggest promoters in the game between Dana White and Scott Coker. So are the two really night and day?

“I feel more of a sincerity coming from Scott Coker” he said. “I’ve had fights where I wanted to fight and got hurt, and Scott Coker called me in the ER. Things like that make a difference to a fighter. No one wants to feel like you’re just a piece of meat. I think the demand and the level of pressure that Dana keeps on the fighters [in the UFC], it loses that connection that you’re still a human being. Just for me personally, I feel that Scott Coker is more sincere.”

At Bellator 182 in New York, Casey will face Chris Honeycutt, an NCAA Division I All-American. What’s his take on the fight, and what has his focus been heading into the event?

“I match up very well” Casey feels. “I’m a national champion in jiu-jitsu, I’ve been a pan-American champion, I’ve been second place, third place in the world championships. I’m no slouch when it comes to the grappling myself.”

Conditioning has been a question mark in the past for Casey, however, and it’s something he has acknowledged and worked to address. “The primary focus for me in this training camp is my conditioning” he said. “Everyone feels like when they fight me, ‘if I can get to the later rounds, I got him.’ So I took that out of the equation. I reassessed everything, I talked with my training partners, I talked with all my coaches, and we came up with a recipe that really feels like it has my body able to perform at the level [it needs to be at].”

“The amount of rounds I’ve been able to do in preparation for this fight has been night and day compared to my other training camps. With that being said, you’re going to see a fresh fighter, a fighter moving on his feet. I’m faster than you’ve ever seen me at this point. That’s what I’m excited to go out there and showcase.”

He’ll get to showcase all of it Friday, when Bellator 182 goes down in Verona, New York at the Turning Stone Resort and Casino. 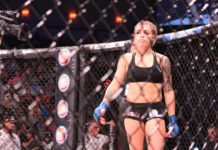 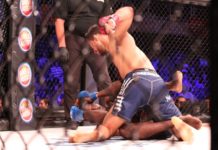 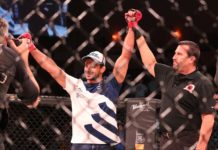 Bellator’s Andrey Koreshkov Wants Title Back, Doesn’t Care Who He Fights For It