Asian MMA powerhouse ONE Championship announced today that it will be returning to Kuala Lumpur, Malaysia in August. The promotion has booked a featherweight title fight to headline the event, entitled Quest for Greatness. The card will be held at Stadium Negara on August 18.

In the main event, reigning featherweight champ Marat “Cobra” Gafurov (15-0) puts his title and undefeated record on the line against Australia’s Martin Nguyen (8-1). The pair has met previously, with Gafurov submitting Nguyen via rear-naked choke in the first round of their 2015 contest at One Championship: Odyssey of Champions.

Since that night, Nguyen as secured four straight victories under the ONE Championship banner, all by stoppage. It’s worth noting that Nguyen took the first fight with Gafurov on less than a week’s notice.

In a press release from earlier today, ONE Championship Chairman and CEO Chatri Sityodtong said that “It is always an exciting time in Kuala Lumpur whenever our world-class athletes climb atop Asia’s biggest and grandest martial arts stage. Our warriors are eager to put on a show for fans in Kuala Lumpur, and it is our honor to have them perform in this marvelous city. Marat Gafurov and Martin Nguyen are two of the promotion’s finest featherweights. They have met before, with Gafurov taking victory via submission in their first encounter. This time, however, a better-prepared and refocused Nguyen vows to finally bring the title back to Sydney.”

Also on the ONE Championship: Quest for Greatness card will be Malaysia’s own Ev Ting, facing former ONE Championship welterweight title holder Nobutatsu Suzuki. Another Malaysian native, Agilan Thani, will also mark his first fight back since losing to welterweight champ Ben Askren when he meets Sherif Mohamed. In bantamweight action Kevin “The Silencer” Belingon will meet Reece McLaren, while flyweights Gianni Subba and Riku Shibuya do battle.

A number of other fights were also announced for the card. ONE Championship: Quest for Greatness takes place August 18 at Stadium Negara in Kuala Lumpur, Malaysia. 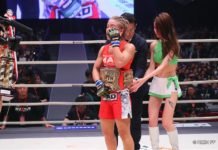