LFA 16 was set to go down on July 14 with a main event featuring Andrea Lee defending her LFA flyweight championship. Unfortunately for KGB Lee, however, visa issues with opponent Davina Maciel have forced the bout off the card. The event takes place in Dallas, Texas, and was to mark Lee’s first title defense since winning the title earlier this year.

Lee (7-2), who pulls double duty in both Legacy Fighting Alliance and Invicta FC, last fought in May, where she won a split decision against Liz Tracy at Invicta FC 23. Prior to that, she defeated Heather Bassett via arm bar at LFA 4 in February to become the inaugural LFA women’s flyweight champion.

To Friends and fans. It is with a heavy heart that I announce that my world title defense has been scratched. I was notified Friday eve that my fight with Davina Maciel would not happen due to unforeseen visa issues with the Brazilian fighter. Collin Cantrell and Ed Soares worked diligently to find a replacement and contacted at least 20 fighters but had no takes. So this is the bad news and I’m pretty depressed needless to day. However, LFA has asked me to come anyway as their guest so I’ll get to spend even more time hanging out, taking pics and seeing everyone. Still gonna be a great card with my friends Johnny Bedford and Levi Mowles. Come hanf out wth me in deep Ellum and help me drown my sorrows. next fight announcement hopefully coming very soon.

With luck, it won’t be long before the talented KGB Lee gets back in the cage. 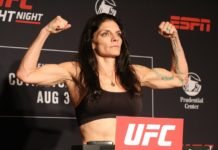 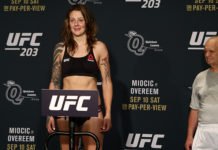 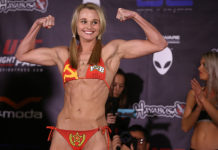