Kevin Ferguson Jr., son of the late Kimbo Slice and better known as Baby Slice, is a late addition to the Bellator 179 card later this month. The event, taking place in London, England, goes down May 19 at the SSE Arena. The Sun broke the news of Slice’s addition to the card. Baby Slice will face Darryal Griffin at the event.

It’s a fight that may provide some closure for the fighter, or at least bring things full circle. His father had been expected to fight in London last year.

Heavyweight star Kimbo Slice was booked to meet James Thompson in London last July at Bellator 158. Tragically, he died of heart failure a month earlier. Slice was just 42. Only months earlier, Ferguson Jr. had made his amateur debut, earning a win in the Warrior Nation promotion. He picked up the torch for the Slice name after his father’s passing, signing with Bellator MMA and turning pro last November. The younger Slice, who fights at welterweight, suffered a loss in his first fight against Aaron Hamilton at Bellator 165. His Bellator 179 bout against Griffin marks his return to the cage.

Bellator MMA confirmed the bout via social media following the story in The Sun. The fight will take place on the preliminary card. Griffin is making his pro debut in the fight, but went 2-2 as an amateur. 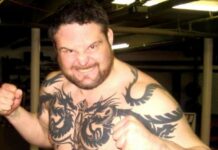 Bellator 253: Baby Slice Looking to Move Up the Ranks at 155lbs