The Bellator featherweight world grand prix returns on Thursday night at Bellator 253. Along with the return of the tournament, it was also a big night for Team Bodyshop, who had three fighters on the card: A.J. McKee, Joey Davis, and Baby Slice (Kevin Ferguson Jr.).

Slice would appear on the preliminary card, taking on Kaheem Murray in a bout pushed back from last March, when the coronavirus pandemic hit U.S. shores.

Also in action on the preliminary portion of Bellator 253 were Jeremy Kennedy and Matt Bessette. The two UFC veterans faced off in a key featherweight bout. Young prospect Jay Jay Wilson was back as well. And Jaleel Willis, who had been expected to make his Bellator debut earlier this year against Patricky Pitbull (until Pitbull withdrew from the fight last minute due to illness) was paired up with Mark Lemminger.

The Bellator 253 preliminary card kicks off at 4:15PM ET. Results will be available below. A live stream of all the action can be viewed in the embed above. 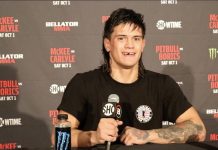