Barbosa (3-2) returns to action at LFA 148 this Friday, and so far holds a win over UFC fighter Karine Silva, while having competed with UFC featherweight Josiane Nunes, and recent Bellator women’s flyweight signee Jena Bishop.

“I feel good. Ready for the fight. Next week, I’m ready,” Barbosa told Cageside Press in a recent exclusive interview, ahead of her return against Mariana Piccolo. For Barbosa, it’s her first activity in over 12 months.

The Brazilian was supposed to be in action earlier this year, in a fight with Lisa Mauldin at LFA 137. It didn’t happen. “They told me my opponent got an injury, and that’s it,” Barbosa explained.

Not fighting, however, has been a struggle for an athlete who has made the move to the U.S. to further her combat sports career. “It’s hard because I’m a fighter. All the time, I’m ready for a fight. When fights don’t happen, you spend a lot of money for a fight. [You lose] sponsorships. People give me time to train with me. It’s not just difficult for me, but everybody around me. It’s no good. You think about like, business. It’s my job. If I don’t fight, people don’t pay me.”

Which is why, in part, that Barbosa is so elated to be fighting again. Another reason? The support she now has in her new home in the U.S.

“Yeah I’m excited, because I’m here now, I have a lot of friends. My students, or my kids, go there, parents, everybody. I’m excited for it. I feel like here, I’m fighting at home, in my home. This is my family now, so I feel good.”

That match-up at LFA 148, with Piccolo, is one Barbosa sees as favorable.

“I think it’s good. Mariana is a good fighter. Has a good base.” Barbosa sees her upcoming opponent as part of the “new generation,” that “fights MMA” overall, instead of relying on a single discipline. “She’s good in everything she’s doing. I think it’s a good match.”

If all goes well against Barbosa, Dione Barbosa has no plans of resting on her laurels. She wants to stay busy moving forward.

“I can’t wait one year to fight again. I’m so happy to have this fight now,” said Barbosa, who doesn’t even want to think about sitting out a lengthy stretch again. “The perfect fight for me, the next fight, is like, just fight. I don’t care who, I just want to fight. That’s it.” 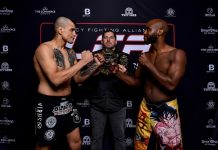 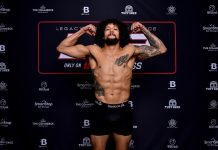 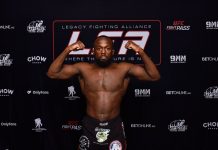