Tai Emery’s popularity has pretty much exploded since her viral BKFC Thailand celebration back in September.

At BKFC Thailand 3, Emery, formerly of the Legends Football League, celebrated a knockout of Rung-Arun Khunchai by climbing the ropes, raising her hands in celebration — then pulling up her top and giving the crowd in attendance, quite frankly, an eyeful.

Social media being what it is, clips of that moment instantly went viral. But where Janet Jackson was hounded following a “wardrobe malfunction” at the SuperBowl years ago, Emery’s celebration on the comparatively smaller stage of BKFC was met with enthusiasm by fight fans.

The media certainly got mileage out of the clip was well, and it has transformed Emery’s life almost literally overnight. Which makes it hard for the Australian to put it into words.

“Not really. I don’t know if I can put it into words, but probably for the first few weeks, I just spent a lot of time just bursting into happy tears being like ‘I was just sleeping on concrete a few months ago,'” Emery recalled, touching on her time living in poverty ahead of the fight. “Life changing, literally falling asleep and waking up, and the world had changed and had become the reality that— I always had this picture in my head that you just continue to work for, and I’m sure every fighter has that, that’s the thing that keeps us waking up and keeps us going to the gym. So to have that just align into reality, yeah, that’s pretty much exactly what happened.”

“After years of people always saying ‘no’ or trying to tell you what to do. I feel like I’ve always kind of kept the blinkers on and just kept working, and that was my final moment of like ‘yes! See? You see me now, b*tches?'”

It did not take long for Tai Emery to recognize that things had changed. “My whole inbox just continued to be full, so I probably realized that it was as crazy as what it was maybe within 24 hours,” she told us. “Maybe even just a week later. I don’t know, because I was just kind of happy. I was happy about a million other things. I guess for everyone else, when Joe Rogan follows you, you get that— it’s like when Oprah Winfrey used to give away cars. I think for our generation, we get that out of Joe Rogan, because that’s the person that we’re all looking to for a different sort of leader.”

“I think when that like really smacked me, that’s when I went ‘okay, we’ve got the world’s attention here.'” Then, there was the multi-platform, multi-national nature of all that media coverage. “That was another probably big fat realization, is it wasn’t just the internet. It became newspaper clipping, in the magazines. We took over social media and the world.”

Next up for Emery is Po Denman, and for Emery, it’s the same feeling this time out, the same pressure, despite Denman’s notoriety.

“Added pressure? 100%. This girl has knocked a guy out. She’s had more bare-knuckle fights than me. But I love that sort of challenge. And to know that someone has knocked a man out in bare-knuckle, than she’s not someone to be messed with.” 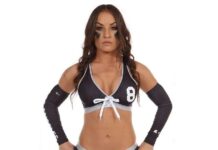