Following the abduction and murder of UFC heavyweight Walt Harris’ stepdaughter, Aniah Blanchard, in the Fall of 2019, her alleged killer was swiftly tracked down and apprehended.

Now, the man accused of kidnapping, robbing, and murdering Blanchard has been hit with three counts of capital murder, indicted by a Grand Jury in Alabama on Tuesday.

The indictments had long been expected. Yazeed, who has a lengthy criminal history, will face the death penalty if convicted.

Blanchard’s abduction and tragic death saw a frantic search for the college student end in tragedy, with Harris later becoming the face of the movement to pass Aniah’s Law in the state — aimed at preventing felons convicted of serious crimes from being released on bail.

Yazeed was out on bail at the time of Blanchard’s murder, having been accused in a previous attempted murder and kidnapping incident involving the beating of a 77-year old man in January 2019. In 2017, Yazeed was charged with aggravated battery on a law enforcement officer.

He had previously been convicted of felony drug possession in 2015, and charged with attempted murder in 2012 after ramming his car into a police cruiser— though a grand jury did not indict him in the latter incident. In 2011, he had been hit with robbery charges, but was not indicted on those counts either.

Aniah’s Law was recently passed by voters in Alabama, and potentially puts bail out of reach for those accused of kidnapping, rape, sodomy, domestic violence, human trafficking, burglary, arson, and robbery where charges are in the first degree, as well as aggravated child abuse, sexual torture, terrorism, as well as non-capital murder.

Walt Harris has not competed since a June 2021 loss to Marcin Tybura. 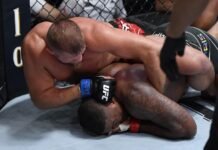