Sherman (16-10) is coming off a TKO finish of Jared Vanderaa back in July.

“It was huge man. Obviously for my career, for my mental framework, for everything. The win was big man, and it was clutch. We had spoke before and said all we needed was just a little spark and then we were going to light this thing up, and keep the ball rolling,” Sherman told the media on Wednesday.

Sherman did not let the win get to his head however opting to keep his mindset unaffected by the result of a fight.

“I try not to let the outcome of a fight dictate those aspects of my life because I don’t want to get back into the habit of letting outcomes control every other variable that I have going on. The win was great, but we still train the same way, and wake up looking forward to practice, waking up looking forward to just everyday life,” Sherman said.

Sherman takes on Josh Parisian on the main card at the UFC APEX.

“I think it’s great man. I’m excited I really am. I’m excited about this fight. I was telling Dom today in our interview when I look at film on fighters usually I try to take two key kind of elements and break them down. What can we take away from this person? Is it their body that’s going to break first, or is it going to be their will? I think when we look at Josh Parisian and his fights the cat….I don’t think he got to the UFC on a certain skill set,” Sherman said.

“I think he got to the UFC because he’s got a lot of heart, and he’s very durable. So when looking at that and looking at the fight footage I know that his will is going to surpass what his body is capable of enduring. (I’m) going to pick this guy apart and inflict as much damage as possible to where he has no choice but to crumble.”

Watch the entire media day scrum with Chase Sherman above. He takes on Josh Parisian at UFC Vegas 64 on Saturday night. 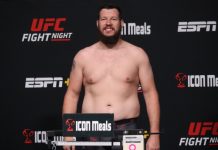