UFC flyweight Miranda Maverick has signed a new contract with the promotion ahead of rebooking her fight with Shanna Young for November 5.

One of the UFC’s top young prospects has signed a new contract with the promotion.  Flyweight Miranda Maverick announced on social media that she had signed a new contract with the UFC and that her fight with Shanna Young, which was previously scheduled for this past Saturday at UFC 278 before Young withdrew due to illness, had been rebooked for a Fight Night event on November 5.

A post shared by Miranda “Fear The” MAVERICK 🦅 (@fearthemaverick)

Maverick (10-4) had said that she was entering the final fight of her deal with her match against Young and that she planned to negotiate for a new contract  after the fight.  Maverick is currently 3-2 in the UFC since joining the company in 2020 and is coming off a victory over former LFA champion Sabina Mazo in March.

Young (8-4) withdrew from the bout the night before the weigh ins due to being transported to the hospital due to illness.  After dropping her first two fights in the UFC, Young was looking to build on an April victory over Gina Mazany earlier this year.  Maverick and Young had fought previously in 2019 in an exhibition fight under the Invicta FC banner where Maverick won by first round submission.

As of this writing, no location, venue, or headliner has been announced for the event. 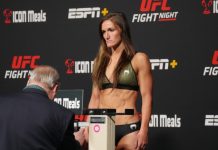