Invicta FC will return to Oklahoma next month, and is bringing some familiar faces with it.

In addition to that match-up, promotion officials announced five more fights for the Invicta FC 49 card on Wednesday. Among the names included, Bellator veteran Kristina “Warhorse” Williams, and The Ultimate Fighter 30 competitor Helen Peralta, fighting for the first time since her appearance on the show.

Peralta (5-2) has five wins and just a single loss under the Invicta FC banner, but fell to Katlyn Neil during the TUF 30 women’s flyweight tournament. Peralta’s only other loss as a pro came against fellow TUF 30 fighter Laura Gallardo in CFFC last year.

In addition to her MMA career, Peralta has gone 2-0 in bare-knuckle boxing, taking part in a couple of early BKFC events.

At Invicta FC 49, Peralta will face UFC veteran Poliana Botelho (8-5), who went 3-4 inside the octagon and was released on the tail of a three-fight losing streak earlier this year.

Williams (6-3) has won back-to-back fights in Invicta FC, and will be facing Ketlen Souza on September 28. Souza (11-3) had been expected to fight for flyweight gold back in March, in what would have been her promotional debut. She was forced out of the bout on short notice.

Williams vs. Souza will serve as the evening’s co-main event, with “Warhorse” fighting at home in Oklahoma.

Invicta FC 49 will take place on September 28 at the Sugar Creek Casino in Hinton, Oklahoma. The full list of fights announced on Wednesday is as follows: 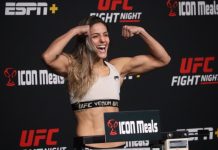