The notorious Askar Mozharov saw his reputation in tatters after allegations of falsifying his record emerged ahead of his one and only UFC fight earlier this year.

Now, after losing the bout and being cut by the UFC after his record drastically changed just days out from his fight with Alonzo Menifield, Mozharov has been hit with another scandal. This time, it’s a drug test failure under the NSAC, with the Ukrainian testing positive for GW1516 sulfone — a hormone and metabolic modulator banned by the NSAC at the levels Mozharov tested positive for.

Interestingly enough, those same levels were under the USADA threshold for the substance, so Mozharov is only in hot water with the NSAC. The drug test stems from his UFC Vegas 56 fight with Menifield on June 4, 2022, where Mozharov was put away with elbows inside of a round.

Per a report by MMA Junkie, Mozharov and his team have been in touch with the commission, with a resolution likely at the commission’s next meeting on September 20.

Mozharov reportedly retired from MMA after being dropped by the UFC, at least according to a post on his Instagram profile. After joining the UFC as a 25-7 fighter, he currently holds a record of 17-13 after numerous irregularities pertaining to his professional record were uncovered. 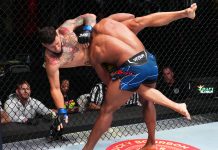