Saturday’s UFC Vegas 56 card was topped by heavyweights Alexander Volkov and Jairzinho Rozenstruik, with the fight ending in a TKO victory for the Russian. The stoppage, however, left “Bigi Boy” Rozenstruik protesting, insistent that ref Herb Dean had waved things off prematurely.

Where does Rozenstruik go from here? We’ll try to answer that, and play matchmaker for the losing side of the UFC Vegas 56 main card.

Jair Rozenstruik remains something of a conundrum ten fights into his UFC career. At times, he has been hesitant in fights where he should have been aggressive. In others, he’s opted to swing for the fences. At UFC Vegas 56, he went up against something of a rarity — an opponent bigger than himself. Ultimately, he was tagged a few times, and the ref waved the fight off. While Rozenstruik immediately protested the stoppage, those protests don’t matter much in the grand scheme of things. On paper, a loss is a loss, and athletic commissions simply will not overturn that sort of result, given the ref was doing his job and protecting the fighter.

The end result is that Rozenstruik is on the first losing streak of his career. He remains a threat thanks to his kickboxing and knockout power, but he’ll need to pull out of this slump.

Coming up, Derrick Lewis is fighting Sergei Pavlovich. Should he lose, Lewis will be on a similar two-fight skid. That’s a fun fight. If Pavlovich comes up short, that works as well. So give Rozenstruik the loser of that match-up.

Thanks to a split decision win over Edson Barboza back in 2020, Dan Ige began to be looked at as a real player in the featherweight division. In hindsight, that may have been premature. Many had Barboza winning that fight, and while Ige is as game as they come and puts on exciting fights, he’s been losing them more often than not. Since the Barboza fight, Ige is 1-4, with losses to Calvin Kattar, The Korean Zombie, Josh Emmett, and now Movsar Evloev. The only win in that span came against Gavin Tucker, who has struggled to fight consistently.

Ige probably needs a step back at this point, and some time to regroup. There’s no way you cut the Hawaiian despite three straight losses, but give him an opponent in a similar spot. Doo-Ho Choi was once the next big thing at featherweight, but has lost three straight fights. He was supposed to return last year against Danny Chavez, but pulled out due to injury. If he’s ready to go, that fight could be fireworks — and serves as a rehabilitation project of sorts for the winner.

History has not been kind to some of The Ultimate Fighter’s more recent winners. Jesse Taylor, Nicco Montano, and Brad Katona are no longer with the promotion, while Michael Trizano, who won on the same season as Katona, has struggled to stay active, and relevant.

He suffered another setback at UFC Vegas 56, losing to promotional newcomer Lucas Almeida — a fighter who came up short on the Contender Series. Trizano is now 3-3 in the UFC, including his win at the TUF 27 finale. While he won the show at lightweight, he’s now at 145, but that hasn’t panned out either.

That sort of uninspiring run means Trizano’s next fight will be a must-win, and pairing him up with another Contender Series fighter might be the play. Tucker Lutz is 1-1 in the UFC, and coming off a loss to Pat Sabatini that has aged better than most. He was supposed to fight in March, only for his opponent to drop out. Book this one.

A 1-4 record in her last five fights, and three straight losses, may end up with Poliana Botelho being shown the door. But if the UFC opts to give her one more go, then try her against Mariya Agapova, who is coming off a loss back in March.

It’s obvious now that Zarrukh Adashev jumped to the UFC way too early in his MMA career. While he has a kickboxing background, he arrived with a record of 3-1 in MMA. Not even five fights. While his three wins to that point had come under the Bellator banner, he wasn’t exactly fighting top guys over there. Bellator has some real killers, but Adashev didn’t so much as sniff them.

Now, he’s 1-3 through four UFC fights. Assuming he was on a four-fight deal, if they bring him back, it feels like the right play is to book him against an up-and-comer. Jake Hadley just suffered a considerable setback in his promotional debut, against a far more experienced opponent in Allan Nascimento. Adashev might be more his speed at this point.

Ukraine’s Askar Mozharov became the most talked about fighter on the UFC Vegas 56 card, but not for any of the usual reasons. Rather, what can now be called “record-gate” saw his pro MMA record drop from 25-7 to 21-11 to 19-12 in the days leading up to his fight with Alonzo Menifield. The UFC certainly took notice, adjusting his record on the broadcast. The controversy stemmed from online record keepers Sherdog and Tapology discovering Mozharov had multiple profiles under different names, and had over the years attempted to have his record changed. Allegedly, of course. Sherdog’s FF Files has a pretty good breakdown of what they believe transpired, and have labelled Mozharov a fraud.

We’re not here to pass judgment on any fighter, nor should any media outlet really. And we say that as one of the few outlets who actually has a writer who has stepped into the cage. Still, Mozharov’s “preposterous” record, to borrow a term Menifield himself used ahead of the fight, may see him cut from the UFC as a result. He was smashed by elbows and put away early, and fought very much like a fighter with a padded record.

On the flip side, all publicity is good publicity, right? If you’re not cheating, you’re not trying, so on and so forth. We’re talking about a promotion who booked Dean Barry vs. Mike Jackson in 2022, so maybe they give Mozharov another shot, in the hopes that people will tune in to see him smashed again.

Caio Borralho won a technical decision in his UFC debut, thanks to illegal strikes he committed that ended the fight early. He’s fighting fellow Contender Series winner Armen Petrosyan next. Give Mozharov the loser, if he sticks around. 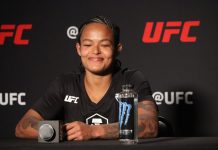 UFC Vegas 56: Karine Silva Knew She Would Finish Botelho, Will Be Ready For Next Bout