The heartwarming underdog story of Carlos Leal finally came to an end on Saturday at PFL 8 of the 2022 season, as Sadibou Sy won a competitive decision in the opening round of the promotion’s playoff format.

Former LFA champion Leal had started the season as an alternate after winning by knockout and decision in his two PFL Challenger Series bouts, a PFL show format where fighters can earn a spot in the season proper with a chance to win a million dollars. He started the regular season as an unknown alternate, but when he mixed the martial arts impressively to comprehensively beat Ray Cooper III, last year’s PFL welterweight champion, in a fight that was close to being stopped at points, he found himself on many fan’s radar.

However it was the former kickboxing champion Sy who came away with the victory by a unanimous decision of 29-27 on all judge’s scorecards on Saturday in Cardiff, Wales. The Swede had long dealt with issues with his takedown defense, but in his last bout against former UFC title challenger Rory MacDonald, he seemed to put that behind him. Although he was controlled in the clinch for much of the bout he almost entirely minimized the damage ‘The Red King’ was able to do from that position. Against MacDonald, he took his opponent down on two occasions, and out-struck Rory comprehensively on the feet with a combination of his long jab and lightning fast kicks.

It was a similar game-plan here against the Brazilian, Leal. With a four inch height advantage and eight inch reach advantage, Sy towered over Leal and in the first round his jab was bloodying up Leal’s nose badly, a round he pretty clearly won even though it was competitive. Leal came out intending to shoot takedowns but he gave up after two early unsuccessful attempts and did not press the advantage he seemed to have in the clinch, instead retreating to range after the takedowns were stuffed.

The second round was a different story. Leal’s corner clearly told him he needed to work in the clinch and he did just that. Much of the round was spent there, where consistent damage with knees was done. Even at striking range the fight was much closer. Although Sy still defended the takedowns, ‘The Lion’ used Sadibou’s tendency to back up to the fence against him by being more intense with his pressure and often leaping in with big punches when he cornered his foe. The men traded body kicks which drained them seemingly equally towards the end of the round. Although Sy held his own in a competitive round, Leal had gained all the momentum and almost definitely tied up the scorecards going into the third round.

The dichotomy between the two men was just as clear in the final round as in the first two: Leal wanted to get on the inside to clinch or land bombs while Sy wanted to maintain distance so he could use those long legs and arms for jabs and kicks. After a bit of a striking dance where both men avoided each other’s shots for the most part, Leal clinched up once again, but then disaster struck when a knee inadvertently struck the Swede in his cup, pausing the action and sending him to the floor for a minute to recover. In an unusual and controversial move, Gary Copeland took a point from Leal despite this being his first offense and there being no prior warning about fouls of any sort.

Carlos Leal seemed maddened by the point deduction as he immediately came out from the timeout swinging overhands and backing Sy up to the fence. Sy attempted a reactive takedown of his own to break up the pressure from Leal, though Leal scrambled out of it and they got back to striking. The round was razor thin in the end. Sadibou landed slightly more good strikes than Leal did at range, but Leal had two stretches of clinch control when he did damage. Going to the scorecards it could have been either a win for Sadibou Sy or a draw, where PFL’s thus far unused new tiebreaker rules would go into effect and move on the fighter who the judges thought had the most complete body of work in this fight.

However all three judges were in agreement and Sadibou Sy will move on to the final of the welterweight tournament where he will face either Rory MacDonald in a rematch of their recent bout or Dilano Taylor, the seventh seed in the regular season and a short notice replacement fighting Rory today in the main event. 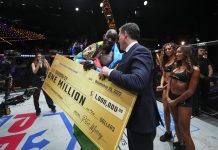 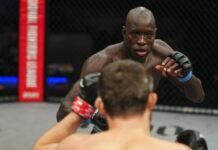